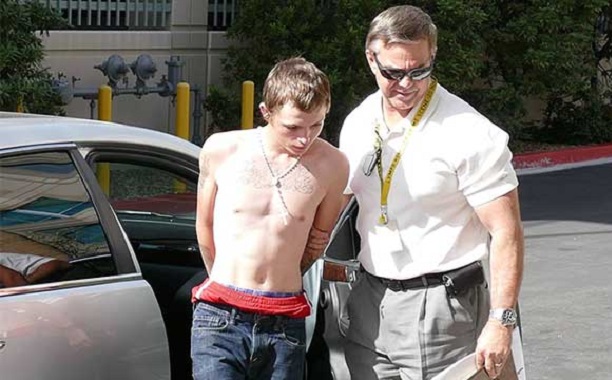 Eric Martin Nowsch II, the suspect in the recent fatal shooting of a Las Vegas woman, told his friends that he “got those kids” that were after him just hours after the deadly incident in which Nowsch allegedly shot and killed a 44-year-old mother, Tammy Meyers.

Got those kids. They were after me, and I got them

Nowsch was arrested on Thursday for last week’s shooting, just days after the anniversary of his father’s suicide.

Meyers leaves behind four children which include her 15-year-old daughter, Kristal, and 22-year-old son, Brandon.

A police report released Friday indicated that the 19-year-old suspect told a friend that he had fired 22 rounds from a .45-caliber handgun.

The initial encounter on the night of the shooting occurred while Tammy and her daughter Kristal were driving home after a late-night driving lesson which took place in the parking lot of a nearby school.

The mother of four, who USA Today reports lived just a block from the suspected shooter, had frequently counseled the troubled neighborhood teen and given him food as well as money, according to her family.

According to the police report, a silver car drove alongside Tammy and her daughter, honked at them and then stopped sideways in front of their vehicle. A 6-foot-tall male passenger then got out of the car and said, “I’m gonna come back for you and your daughter,” according to the victim’s daughter.

The mother and daughter then raced home where the daughter was dropped off before rousing the woman’s 22-year-old son, Brandon, who told his mother to dial 911 and alert the authorities. Instead, she told her son that she would go looking for the car by herself if he was unwilling to come with her. So her son grabbed his 9mm pistol and the pair drove off in search of the car, a silver Audi.

Within a short period of time, the two spotted the suspected silver Audi and began following it until the point at which one of the Audi’s passengers fired several rounds at them. The pair then fled back to their home while the suspects followed. Once the mother and son pulled into their driveway, the suspect who had been tailing them back to their home then fired several more rounds. Brandon told police that he reacted by firing three shots from his 9mm before the Audi backed out and took off.

Brandon then noticed that his mother had been shot in the head. She died on February 14, 2015 after life support was disconnected.

Police are still seeking the driver of the Audi in connection with the alleged murder.

Nowsch, the suspected shooter in the incident, was already in custody on an unrelated warrant on Tuesday when police questioned him about the deadly Vegas shooting, to which he denied having any involvement and was subsequently released by authorities. Two days later, he was arrested at his home after a two-hour standoff with Vegas PD.

A next-door neighbor of Nowsch, Melissa Mour, told the Associated Press that she had discussed the matter of gunshots and screeching tires with Nowsch and that he had spoken as if he liked the victim’s family, as she was quoted having said, “It was like he was upset at whoever did it.”

Mour went on to say that there “aren’t many male figures” in the alleged teen shooter’s life and that he often walked around the neighborhood armed with a firearm.

After the suicide of Nowsch’s father, his neighbors claim he went from being a pleasant kid to both angry as well as confrontational and that he got involved with drugs and eventually dropped out of school.

Bob Meyers, husband of the deceased, said that he and his wife had met the young shooter several times and that he lived just a block away in their neighborhood of Ansan Sister City Park. He explained his late wife’s relationship with the teen as one in which she was “really good to him,” ABC News reported.

We knew how bad he was, but we didn’t know he was this bad, that he had gotten to this point (…) He’s probably watching this right now and I know he’s got to feel bad.”

She was really good to him (…) She fed him, she gave him money, she told him to pull his pants up, and to be a man more times than I can count. But none of you knew this before because it would have hurt what these great Metro detectives were trying to accomplish.”

Nowsch is currently being held without bail. He is scheduled to appear in court on February 16.

In other recent shooting related news here on Immortal News, a shooting in Georgia left at least five dead, Bay Area rapper “The Jacka” was shot and killed in Oakland, and authorities thwarted a Valentine’s Day shooting plan scheduled to take place at a mall in Halifax.