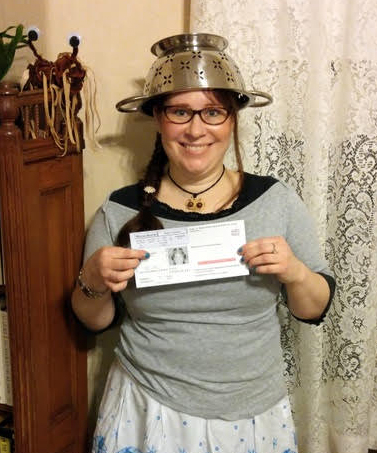 Just over the border from New Hampshire in the Massachusetts city of Lowell, a woman identifying herself as a follower of the Church of the Flying Spaghetti Monster (FSM), otherwise known as Pastafarianism, has been approved by the state’s Registry of Motor Vehicles (RMV) to wear a spaghetti strainer on top of her head in her state issued driver’s ID.

The approval to wear the helmet was initially denied. However, citing religious grounds, Lowell resident Lindsay Miller filed an appeal. Following intervention by the American Humanist Association’s Appignani Humanist Legal Center, the RMV reversed their decision and allowed her to put on her colander and get her driver’s license picture taken.

When she went to have her license renewed back in August of this year, the Massachusetts RMV policy that restricts hats and head coverings — with the exception of those worn for religious reasons — prevented her from wearing her spaghetti strainer. She told the Boston Globe that at the time of the incident, “They were kind of laughing” at her.

They were kind of laughing at me (…) I thought of other religions and women and thought that this was not fair. I thought, ‘Just because you haven’t heard of this belief system, (the Registry of Motor Vehicles) should not be denying me a license’

According to the church’s website, while there are those who perceive the religion to be satirical in nature, it “doesn’t change the fact that by any standard one can come up with” the Church of the Flying Spaghetti Monster is “as legitimate as any other” religion. 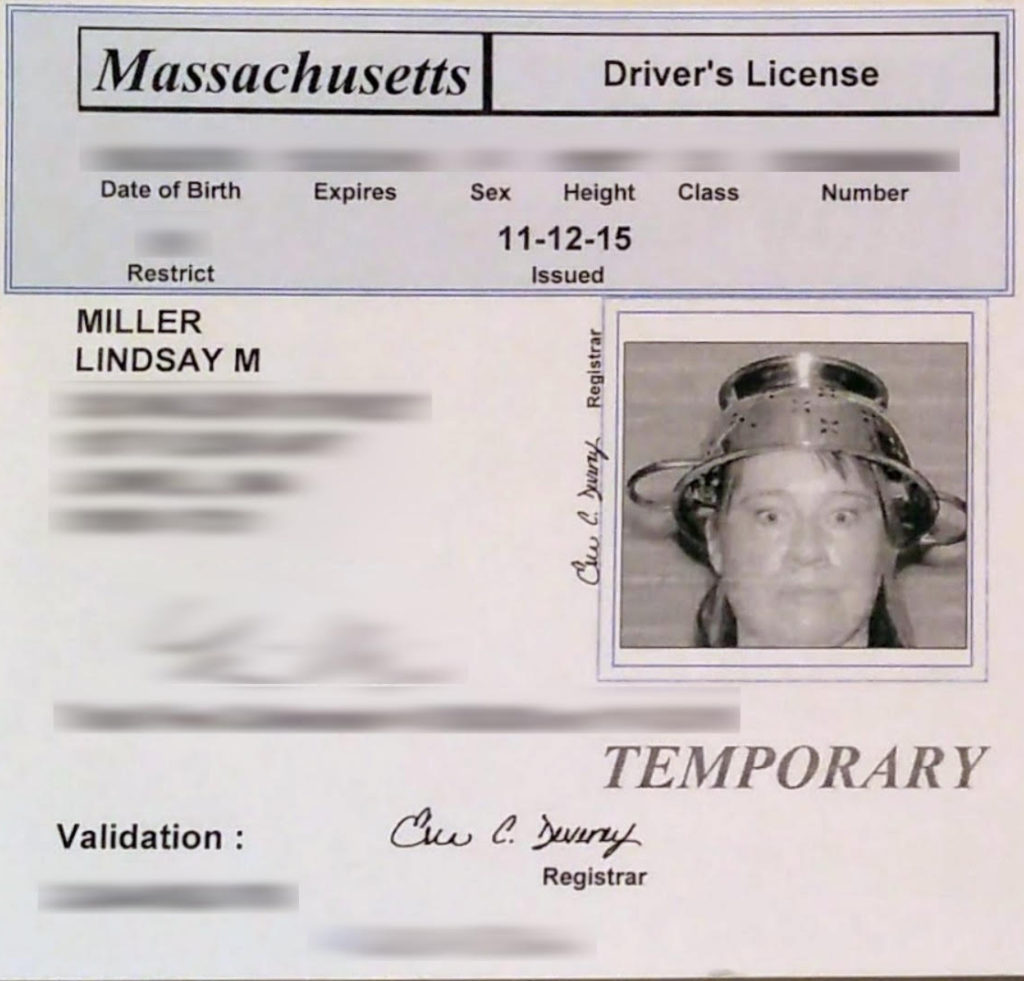 The NY Daily News notes that the church’s website claims that it has existed for hundreds of years before it reached the mainstream back in 2005. The religion’s mainstream status, according to the church’s website, was achieved following an open letter to the Kansas School Board regarding the districts teachings on evolution.

While there’s no cost to becoming a Pastafarian, there is a $25 ordainment fee for those who want to become Pastafarian ministers.

Miller isn’t the first to have honored her religion’s deity, the Spaghetti Monster, in her state issued ID photo, as the NY Daily reports that fellow members of the Church of the Flying Spaghetti Monster from Missouri and Utah have also had their state ID photos taken while wearing spaghetti strainers on their heads.

And they’re not the only ones, as a New York town councilor in the town of Pomfret adorned a strainer while he took his oath for office.