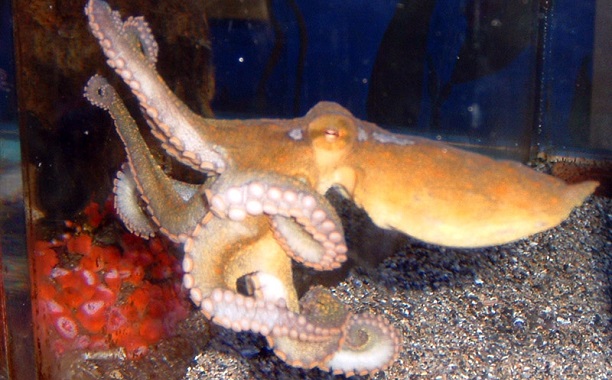 UC Santa Barbara scientists studying the California two-spot octopus (Octopus bimaculoides) have found that the octopus is able to sense light through its skin without input from the central nervous system, a feat which it accomplishes through the employment of light-sensitive proteins known as opsins — proteins which are also found in its almost humanlike eyes.

In the study, which was published in the journal Experimental Biology, the UCSB researchers beamed white light at the two-spot’s skin tissue in a experiment which resulted in the chromatophores changing color and expanding while the light was shone, but when the light was shutoff, the skin returned to its original hue and the chromatophores relaxed. According to the study’s lead author, doctoral student Desmond Ramirez, the experiment’s results suggest light sensors are connected to the chromatophores, enabling a response without requiring input from the eyes or the brain.

While the study’s authors believe the two-spot octopus to be capable of sensing “an increase or change in light” through its skin, Ramirez notes that the skin is actually detecting brightness instead of contrast and edge.

The study’s co-author, Todd Oakley, a professor with the Department of Ecology, Evolution and Marine Biology (EEMB), dubbed the particular process of experimentation the Light-Activated Chromatophore Expansion (LACE).

While the two-spot octopus can sense light through its skin, EEMB doctoral student Ramirez was quoted in a UCSB news report as having explained that the skin of the octopus “doesn’t sense light in the same amount of detail” as it does when it employs its eyes and brain.

Octopus skin doesn’t sense light in the same amount of detail as the animal does when it uses its eyes and brain (…) But it can sense an increase or change in light. Its skin is not detecting contrast and edge but rather brightness.

To Oakley, who refers to cephalopods as the rock stars of the invertebrate world, the study’s findings suggest an evolutionary adaptation.