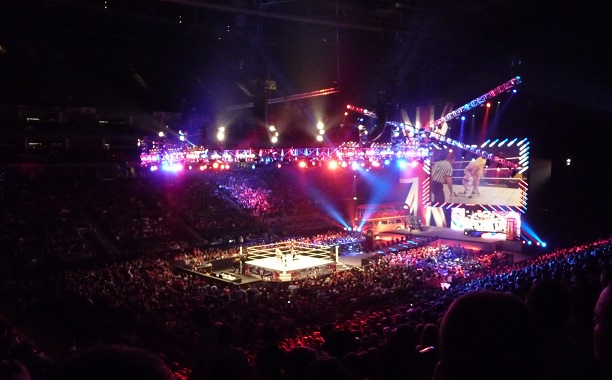 On the heels of one of the worst Extreme Rules pay-per-views in recent history, the WWE will be looking to rebound with a much better showing at the upcoming 2015 edition of ‘Payback’ on May 17.

The defeating of Randy Orton by Seth Rollins (with Ortons own finishing move the RKO) to retain the world heavyweight championship at Extreme Rules, had fans on Monday night voting on the WWE app for Rollins to defend his title Against both Orton and Roman Reigns in a triple threat match at ‘Payback.’

Another match made for the show features John Cena defending the United States Championship in an “I Quit” match against Rusev.

The BenchMarkReporter reports that the WWE has had a difficult time getting people excited about their superstars recently, but there are a few X-factors which people may be willing to pay to watch at ‘Payback.’ With the WWE pulling Daniel Bryant from any and all events he had previously been advertised for, as reported by WrestleZone, the WWE needs a few of its fresh faces to make a big impact at the upcoming pay-per-view.

The superstars under the most pressure to preform heading into ‘Payback’ would be Seth Rollins, Bray Wyatt and Bad News Barrett.

With Barrett winning the king of the ring tournament, everyone will be looking to see if King Barrett will be able to live up to the hype. After being excluded from Extreme Rules, and loosing to Undertaker at WrestleMania 31, Bryan Wyatt is ready to to return to action in ‘Payback’ where it is rumored that he will take on Ryback.

Perhaps under the most pressure to preform is none other than the current World Heavyweight Champion himself, Seth Rollins, who has been booked poorly since winning the title. The hopes of the WWE Universe is that Rollins’ upcoming triple threat match main events ‘Payback’ and is given the time needed to tell an interesting story