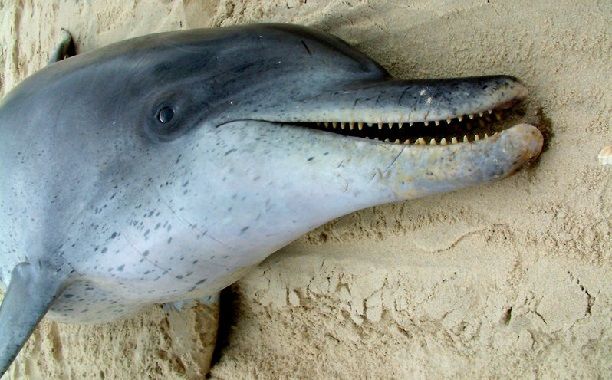 In the coastal city of Hokota, Japan, 149 dolphins became stranded ashore after they beached themselves on a stretch of beach roughly 6 miles long.

Some of the dolphins, which were composed primarily of blackfish and melon-headed whales, were discovered alive, however, they were extremely weak upon discovery and later died, according to an Associated Press report published earlier today on the NY Post.

A combination of the coast guard, an aquarium and city authorities bound together in an attempt to rescue the small gregarious toothed whales sometimes referred to as mahimahi, but better known as dolphins.

While television footage showed dozens of people pouring sea water over the dolphins and covering the with towels in an attempt to keep them from drying up, CTV News indicated in a report that rescuers only managed to save three of the nearly 150 stranded dolphins– who were between 2 to 3 meters in length. The report also indicated that the dolphins were badly scratched, possibly as a result of moving in through the shallow coastal waters onto dry land.

The stretch of beach in Hokota where the dolphins beached themselves is located northeast of Tokyo, Japan.

As for why the dolphins ended up stranded on the beach, cetacean expert Tadasu Yamada with the National Museum of Nature and Science told Japan’s NHK public TV that they may have had a psychological or physiological issue and faced an unknown threat which caused them to panic, subsequently causing the warm-blooded mammals to strand themselves on the beach in an incident reminiscent of a 2011 stranding in which some 50 dolphins essentially did the same thing on a nearby beach.

In other news reported here on Immortal News, a rare albino dolphin has been spotted off the coast of Florida by a state wildlife volunteer with the Florida Fish and Wildlife Conservation Commission.

What do you think caused these dolphins to beach themselves in Japan?