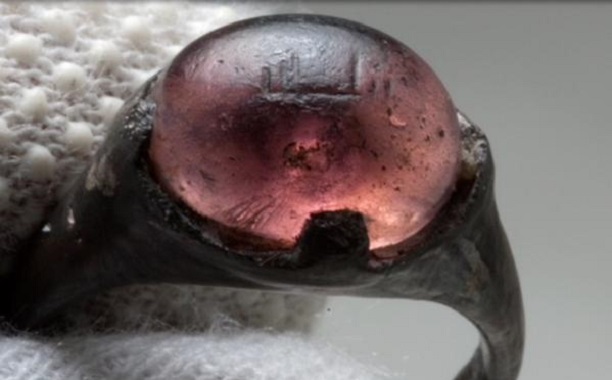 A recent analysis of a ninth century ring inscribed with “for Allah” or “to Allah” has lead researchers to explore a potential connection between Vikings and Islamic civilization, a possible connection which has been mentioned in ancient texts.

The ring was discovered during an excavation more than a century ago in a ninth century Swedish grave. The excavation targeted grave fields at the Viking age trading center of Birka during the late 1800s; between 1872 and 1895.

Originally thought to have been amethyst, according to a 9News report, further examination by experts at Stockholm Sweden who employed a scanning electron microscope to analyze the stone revealed that it’s actually composed of colored glass, which the report notes to have been an exotic material at the time.

The Swedish History Museum in Stockholm cataloged the item as a signet ring consisting of a gilded silver set with an amethyst inscribed in Arabic Kufic writing with the word “Allah.”

Ancient tales of encounters between Islamic culture and Scandinavians dating as far back as roughly 1,000 years ago have been mentioned, however, archaeological evidence to support such claims is rare.

Vikings have a history of trading with Mesopotamia and Egypt which dates back as far as 3,400 years ago; a time when the Scandinavians are known to have traded fancy glass objects through established trade networks, however, experts believe that it’s possible that they traveled to regions in order to trade rather than wait for the networks to make their way up north.

Researchers behind the recent analysis of the Allah ring, which was reported in the peer-reviewed scientific journal Scanning, indicated the ring to be “the only ring with an Arabic inscription found at a Scandinavian archaeological site” that might “constitute material evidence for direct interactions” between Vikings and the Islamic world.

The ring may therefore constitute material evidence for direct interactions between Viking Age Scandinavia and the Islamic world. […] Being the only ring with an Arabic inscription found at a Scandinavian archaeological site, it is a unique object among Swedish Viking Age material.

Discovery News reports that the ring was found in a rectangular wooden coffin along with other jewelry, brooches and the remains of clothing.

While the skeleton was completely decomposed, the objects buried alongside it indicated that it was that of a female buried around 850 A.D.

In other coverage of the ancient world recently reported here on Immortal News, archaeologists claim to have found the legendary “City of the Monkey God” deep in the jungles of Honduras.

What are your thoughts on this Viking era ring inscribed with the word “Allah” in Arabic, is this proof that the Vikings traveled to the Islamic world?