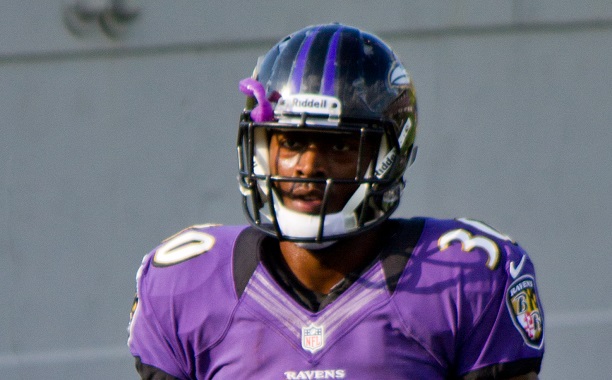 Bernard Pierce, a running back with the Baltimore Ravens, just became the third player on the team to get arrested during this year’s off-season when he was charged with driving under the influence of alcohol on Wednesday.

Police administered a field sobriety test to the NFL running back after he was pulled over near the Baltimore beltway around 2 a.m. ET, according to local law enforcement in Baltimore County.

He’s been charged with driving while under the influence, drive while impaired, exceeding the maximum posted speed limit and driving a vehicle in excess of reasonable and prudent speed on a highway. ESPN reports that he failed his field sobriety test and was driving 55 miles per hour in a 30 MPH zone.

The Ravens tweeted confirmation of the incident in a message which stated that the team is currently “aware of the situation” and that they “take these matters seriously.”

On RB Bernard Pierce: "We are aware of the situation and learning more about it. We take these matters seriously." | http://t.co/2nj03oeluW

The 24-year-old Pierce, who was selected by the Ravens in the third-round of the draft back in 2012, was previously expected to replace Ray Rice back in September, but a lack of productivity and injuries sustained by the player have placed him fourth in the lineup behind Justin Forsett, Lorenzo Taliaferro and Fitzgerald Toussaint.

News of his recent arrest was first reported by WBAL NewsRadio 1090 AM, according to a WBAL TV report.

Cpl. John Wachter with the Baltimore County police indicated that the Ravens running back was pulled over for speeding in his Mustang on Dulaney Valley Road.

He’s since been released.

In 2013, he became a Super Bowl Champion when his team beat the San Francisco 49ers 34 to 31 at the Mercedes-Benz Superdoe in New Orleans, Louisiana.

In other recent football coverage here on Immortal News, the 49ers signed Reggie Bush, a 30-year-old free-agent formerly with the Detroit Lions.