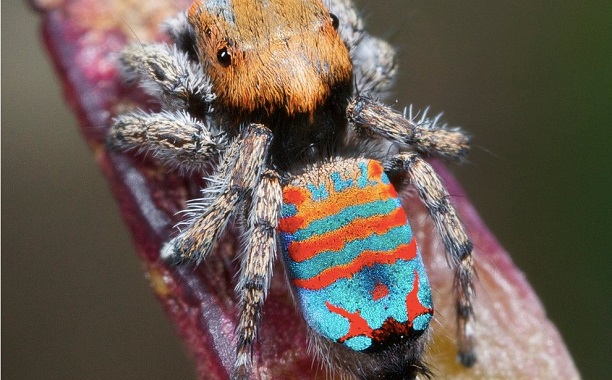 A graduate student at the University of California, Berkeley who studies peacock spiders has, along with a friend who accompanied her into the field, discovered two new species in southeast Queensland, Australia.

Madeline Girard nicknamed the spiders Sparklemuffin, a spider with a vibrantly colored red and blue abdomen, and Skeletorus. The latter of which exhibiting a white and black appearance the graduate student found reminiscent of a skeleton.

A report on the Christian Science Monitor notes that the skeleton-esque spider has an appearance that is quite different from all other known spiders in the species. The report quoted an entomologist specializing in arachnid photography, Jurgen Otto, as having said that Maratus sceletus has an appearance that is “dramatically different” from all other known peacock spiders to date.

While Skeletorus is certainly a unique specimen, the Sparklemuffin spider has an appearance which is similar to three other known species within the peacock spider genus.

The Maratus spider genus of the Salticidae family of jumping spiders is what is commonly referred to as the peacock spider family due to their colorful abdominal flaps which are displayed by the arachnids during courtship.

The very first peacock spider discovery was made in the 1800s, according to Discovery News who cited the editor of the journal Peckhamia, David Hill.

In other recent discoveries reported here on Immortal News, researchers realized that they had discovered a third species of seadragon while examining a Ruby Seadragon specimen.

What do you think of these recently discovered peacock spiders?