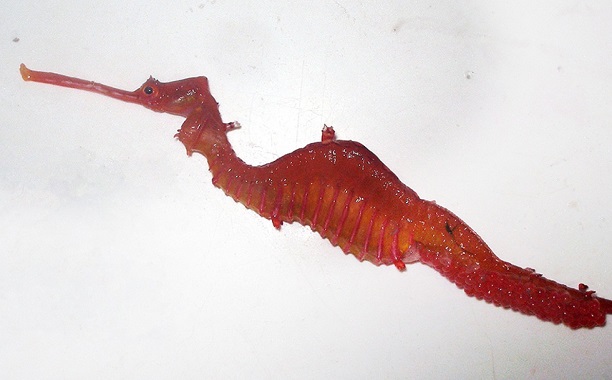 Researchers examining a Ruby Seadragon have determined through a CT scan that the skeletal structure differs from other species of seadragons, making it the third seadragon species discovered, according to a press release put out by scientists at Scripps Institution of Oceanography at U.C. San Diego and the Western Australia Museum (WAM).

Prior to the recent discovery, there were thought to be only two species of seadragons.

Seadragons have a similar leafy-appearance to sea horses, only larger.

The scientists behind the recent discovery of the third seadragon species, phyllopteryx dewysea, noticed something odd about a Ruby’s DNA sample and when they asked to see a full specimen, they realized it was a completely new species which was, unlike the orange Leafy Seadragon or the purple and yellow Common Seadragon, it was a deep red in color.

Nerida Wilson, a marine biologist with WAM, said in the release that it’s “been over 150 years since the last seadragon was described and all of this time we thought there were only two species,” but now, “there is a third species!”

It has been 150 years since the last seadragon was described and all this time we thought that there were only two species (…) Suddenly, there is a third species! If we can overlook such a charismatic new species for so long, we definitely have many more exciting discoveries awaiting us in the oceans.

The CT scan performed by researchers revealed that the specimen, of which the researchers indicated that there are currently only five specimens of in the world, had a different skeletal structure.

In other recent oceanic discoveries here on Immortal News, researchers have found the missing link between fur seals and sea lions.

Subsequently, researchers intend on mounting an expedition to explore the possibility of discovering more of the new species. Which are probably deeper in the ocean than the other species, as Discovery News reports that their red color would assist in camouflaging them in the dim light of the deep ocean.