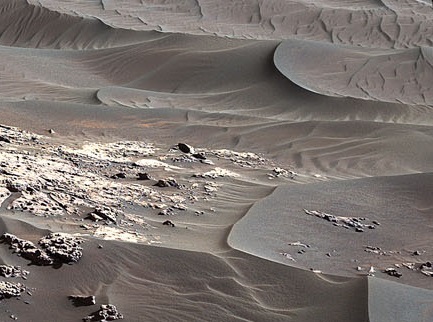 The Curiosity Mars rover has finally reached the first sand dune on the martian planet’s surface, marking the first up-close encounter with a sand dune on a planet other than Earth.

Now that the martian planet exploring vehicle has arrived at the dark sand dunes, which tower as high as two stories, NASA plans to tell the rover to scoop up some sand for analysis.

The rover’s built-in laboratory instruments will allow for an analysis of the material it scoops up from the first dune.

Curiosity, which has been hard at working mining data on behalf of scientists since August of 2012, is presently at the Bagnold Dunes, which run along Mount Sharp’s northwestern flank.

Orbital observations of the dunes show that their edges move by as much as 3 feet per year — based on Earth years.

At this point, NASA indicates that Curiosity’s primary mission objective is to examine layers of Mount Sharp–which has hundreds of layers of exposed rocks in its lower flanks–as it continues on its mission of extraterrestrial exploration.

Mount Sharp, which is located in Gale Crater, is estimated to be roughly 3 miles high.

Scientists believe Gale Crater was once home to lakes that remained on the planet’s surface for as long as 10,000 years at a time, which the Daily Mail reports to be long enough to support life.

Back in February, the Curiosity rover ran into some complications following a short circuit that left its robotic arm disabled. Not long after, once operational capacity had been returned by NASA engineers, the rover captured a video of a blue sunset on Mars.