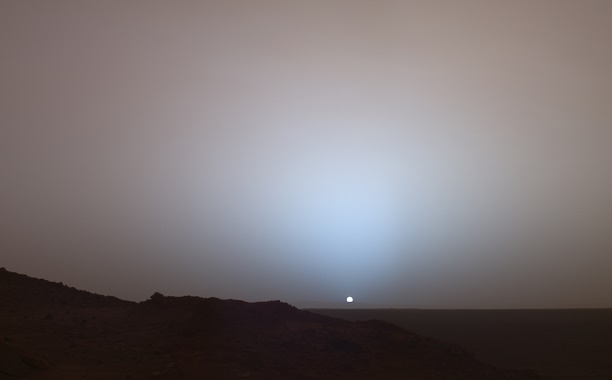 NASA’s Mars rover Curiosity landed on the red planet three years ago and has finally managed to snap a picture of the Martian sunset.

Mars’ blue sunset appears starkly different from ours due to the thinner Martian atmosphere and the dust contained within it. CNET indicated in a report that the images of the Martian sunset were taken between dust storms, but with plenty of dust still in the air, which allowed researchers to analyze the vertical distribution of dust in the Martian atmosphere.

The colors come from the fact that the very fine dust is the right size so that blue light penetrates the atmosphere slightly more efficiently (…) When the blue light scatters off the dust, it stays closer to the direction of the sun than light of other colors does. The rest of the sky is yellow to orange, as yellow and red light scatter all over the sky instead of being absorbed or staying close to the sun.

The rover landed in Mars’ Gale Crater back in August of 2012 in order to determine whether the Red Planet could have supported microbial life at any point in time. Space.com reports that upon landing, the rover gathered evidence which allowed scientists to conclude that an area near its landing site could have potentially been a habitable lake-and-stream system billions of years ago.

Curiosity is now roaming the foothills of the towering Mt. Sharp, which rises 3.4 miles into the Martian sky from Gale’s Center. Mt. Sharp’s many rocky layers preserve a history of Mars’ changing environmental conditions., so the observations Curiosity makes as it climbs should reveal insights about how the Red Planet shifted from a relatively warm and wet world long ago to the cold, dry desert world it is today, mission scientists say.

In other Mars related news here at Immortal News, NASA claims humans could land on Mars by the 2030s.

What are your thoughts on NASA’s video of the blue Martian sunset?