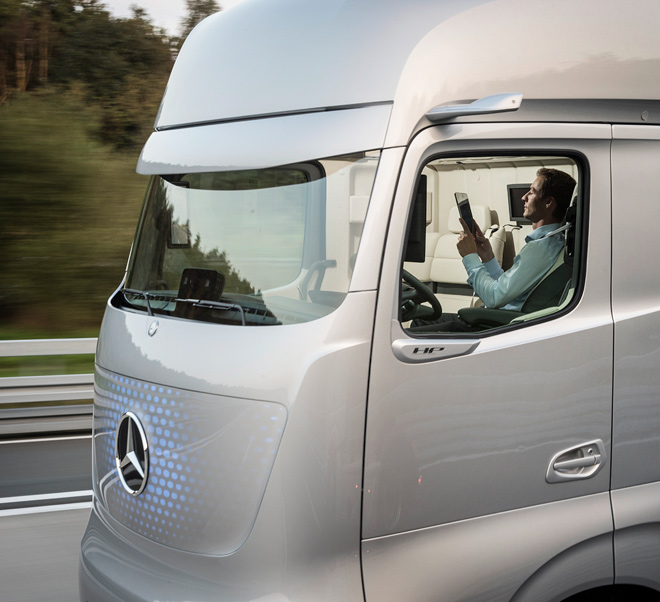 October 2nd will go down in history as the day of the very first test of German auto manufacturer Daimler’s self-driving truck. The Mercedes-Benz Actros was equipped with Daimler’s pioneer ‘Highway Pilot’ software, and successfully navigated 9 miles of busy German traffic.

According to IBT, the self-driving truck had been tested in a wide range of simulated highway scenarios up until now. This real-world excursion, however, marks the dawn of a new era for eco-friendly long-distance trucking. While the Highway Pilot system does require a human operator to take over in the event of unforeseen bad weather or surprise roadwork, its sophisticated smart systems allow for a fairly comprehensive autopilot.

Yahoo News reports that the Mercedes Actros includes adaptive cruise control and hands-free steering, features which allow for an impressive reduction in harmful emissions thanks to the increase in efficient gear shifting. But how does it work? As Daimler execs explain, the Highway Pilot system includes front-mounted radar, stereo cameras, and active speed regulators that all work in conjunction with a human operator.

On long truck routes, one of the primary causes of traffic accidents is human error brought on by exhaustion and the subsequent drop in driver awareness. Daimler seeks to alleviate those issues by giving drivers the ability to save their energy and rest on the road.

Should the car pick up on any inclement weather, blockages, or other roadwork, the Highway Pilot system will alert the driver with both audio and visual signals. If the driver fails to respond, the truck will automatically come to a halt.

While this is only the first in a long line of real-world tests for Daimler’s self-driving truck, the future looks bright. Self-driving cars are already on some U.S. roads, as companies like Honda and Google race to perfect an autopilot for private vehicles. Corporate execs admit that fully self-driving trucks are a long way off, but the Highway Pilot system is a thrilling new player in the self-driving game.