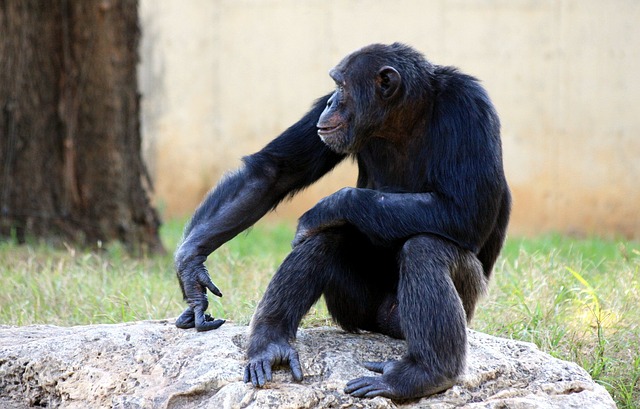 A new study suggests that human hands are actually more primitive than those of chimpanzees. In fact, our hands are more similar to the last common ancestor we shared with chimps millions of years ago than modern chimps, reports Phys.Org.

The study found that “the structure of the modern human hand is largely primitive in nature,” according to a press summary of the study, which was published in the journal Nature Communications.

These findings indicate that the structure of the modern human hand is largely primitive in nature, rather than the result of selective pressures in the context of stone tool-making.

Chimps and orangutans have changed more than humans in the 7 million years since chimps and humans went their separate ways on the evolutionary path. Chimps hands have developed longer fingers, in comparison to the thumb, great for swinging on tree branches.

Alternately, the human thumb is longer in relation to the fingers than that of apes and chimps. This allows for “pad-to-pad” precision grasping, what scientists term the ability of touching fingertips.

Human hands, and the long thumb meant for grasping objects, have changed very little over millions of years, reports Newser. When primitive humans began making tools, “their hands were – in terms of overall proportions – pretty much like ours today,” said Sergio Almecija, scientist at George Washington University and study author.

The inevitable implication is that when hominins (the extended human family excluding apes) started producing flaked stone tools in a systematic fashion, probably as early as 3.3 million years ago, their hands were—in terms of overall proportions—pretty much like ours today.

Almecja adds that the changes in humans hands that allowed tool making likely occurred in the brain. Meaning, the changes that allowed humans to adapt to make and use tools were neurological rather than evolutionary changes.

“(…) the structure of the modern human is largely primitive in nature,” said a university rep.

The findings suggest that the structure of the modern human hand is largely primitive in nature, rather than, as some believe, the result of more recent changes necessary for stone tool-making.

The developments in chimps hands don’t necessarily limit the animals to swinging from trees. In a recent report on Immortal News, scientists discovered that chimps have the cognitive ability to learn how to cook.

On a more interesting note, a group of scientists discovered that chimps utilize weapons when hunting for food – a task the females are in charge of.