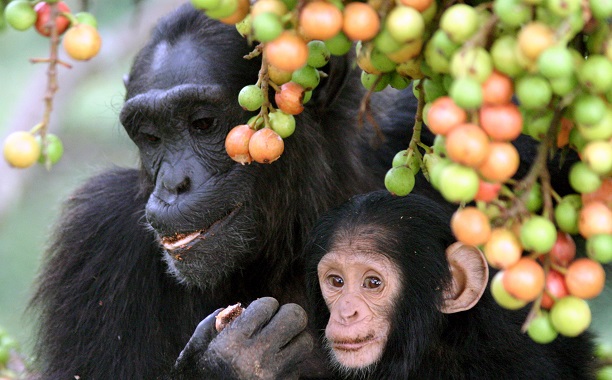 The ability of chimps to apply the concepts of delayed gratification has given scientists crucial clues on when and how early humans first learned to cook. The study published in the Royal Society’s journal Proceedings B looked to examine the individual cognitive skills of chimps and whether they had the skills required to cook.

The BBC reported that Harvard University researcher Dr Warneken tested whether the simians could wait until the raw food could be cooked, and whose findings reveal that they much preferred cooked food as opposed to raw. After a series of experiments, they determined that chimps indeed have the capacity to plan, assess cause-and-effect situations, and to determine that a cooked sweet potato is better than a raw one. But don’t expect a chimp to hand you a juicy burger any time soon.

These findings are crucial bread crumbs in finding the answers of when and how our ancestors discovered the allures of cooking. Dr Rosati, co-author of the study, was quoted by Time as having said, “If the cognitive abilities necessary to engage in cooking are also present in chimpanzees, it would support models in which control of fire rapidly led to cooking.”

If the cognitive abilities necessary to engage in cooking are also present in chimpanzees, it would support models in which control of fire rapidly led to cooking.

The strongest current evidence suggest that hominins learned to cook around 1 million years ago, but this study can help determine that they may have learned to cook a succulent roast even earlier.

Moreover, Warneken was quoted by Discovery News to have said, “Given that brains are an energetically expensive tissue — and humans have brains that are both relatively and absolutely larger than other primates — the shift to a cooked diet may have been a critical factor in the evolution of larger brains in the human lineage.” which cement researchers’ beliefs that these new findings can help prove that cooking has indeed helped the human race achieve the top status in the world’s animal hierarchy.

More exciting chimp-pioneered news coverage here at Immortal News indicates that a group of chimps were sighted carrying tools used to hunt. Also, it was found that the female chimps do a majority of the hunting for their young.