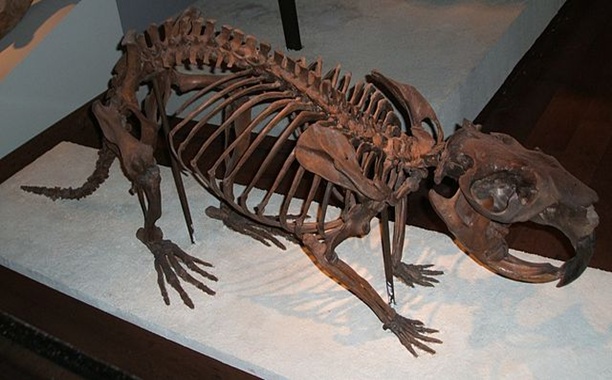 Researchers have unearthed the fossilized remains of a previously undiscovered species of beaver, which lived 28 million years ago, in eastern Oregon.

The fossilized skull and teeth from the new species, named Microtheriomys brevirhinus were found within a mile of the visitors center at the John Day Fossil Beds National Monument, according to a report on CBS News.

According to the monument’s paleontologist, Joshua Samuel, the new species is less than half the size of a modern beaver and related to beavers from Asia that crossed the Bering land bridge to North America about 7 million years ago.

The finding is significant, Samuels claims, because unlike other species of ancient beavers that have been found around the monument, this one appears related to the modern beaver, which is a symbol of Oregon.  The others all went extinct.

The age of the fossils were deduced by their location between two layers of volcanic ash that have been dated from radioactive isotopes. According to Samuels, the conditions in the area naturally nudged the beaver fossils up towards the surface where he and his team could find them.

We’ve got badlands exposures here.  As they get wet, whenever it rains or snows and the temperature heats or cools, the claystone these things are in shrinks and swells.  The bones are pushed out.  The rock breaks apart. The fossils are exposed. This one just came out of the ground it was preserved in.

Fossils from nearly 100 species of mammals have already been found at the monument.

The 10 new species were reported in a study, which was authored by Samuels and Dr. William Korth, published in the Annals of Carnegie Museum.

In other paleontology coverage here at Immortal News, the fossils of terror birds have reveal how the ancient predators once hunted their prey.

What are your thoughts on this new beaver species?