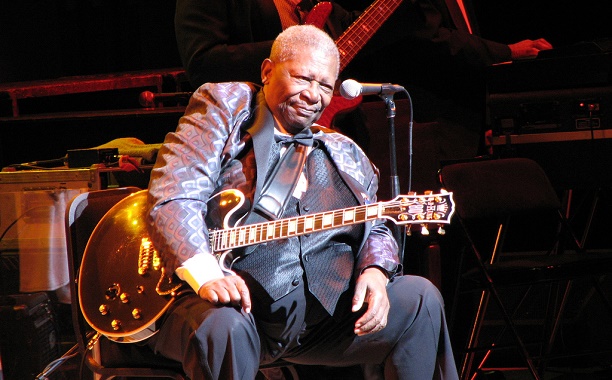 The 15 time Grammy and Rock and Roll Hall of Famer passed away peacefully in his Las Vegas home at the age of 89, his attorney reported to The Associated Press.

Born Riley King in the Mississippi Delta on September 16, 1925, the late King was raised on a cotton farm by his maternal grandmother after his mother passed away when he was just nine years old. Shortly after his grandmother’s death when he was 14 years old, King began to pick cotton on a plantation in Indianola, Mississippi. His first recording, the “Sharecropper Record,” was released in 1940, according to the Hollywood Reporter.

King is credited with having taken the rural 12-bar blues sound and incorporating the horn-driven ensembles of the big city, which he then populated with musicians who understood both swing and jazz that were able to create music which complemented King’s honey-sweet vocals and his passionate guitar pickings. His solos often started with a four- or five-note statement prior to sliding into a soothing, jazzy phrase; which, according to the NY Times, created an instantly recognizable sound for millions of people.

King is also credited with having been a mentor to countless musicians, including the likes of Eric Clapton, and he even assumed the role as a godfather-esque figure to many Chicago blues guitarists, including the late Hubert Sumlin. Blues musician Buddy Guy once described King as the “last blues legend standing.”

Included in the notes to MCA’s 1992 box set, King of the Blues, King said:

The first rock ‘n’ roll I ever knew about was Fats Domino and Little Richard because they were playing blues, but differently (…) And I started to do what I do now — incorporating. You can’t just stay in the same groove all the time. … I tried to edge a little closer to Fats and all of them, but not to go completely.

Perhaps more famous than the iconic blues musician was his guitar, which in an interview with Jazz Weekly, he recalled having while performing in a club in Twist, Arkansas, a show at which he almost lost his life trying to save the fabled guitar from a burning building. The fire began after a brawl between two men resulted in a kerosene-filled pail was knocked over.

When I got on the outside, I realized then that I had left my guitar (a Gibson L-30 with a DeArmond pickup) on the inside. So I went back for it (…) The building was wooden and burning rapidly. It started to collapse around me, and I almost lost my life trying to save my guitar (…) So the next morning, we found out that these two guys who were fighting were fighting about a lady that worked in the little dance hall. We learned that her name was Lucille. So I named the guitar Lucille to remind me to never do a thing like that again.

In his later years, King reflected on his earlier life as he explained how he picked up playing the guitar, as he said that he had “picked a lotta cotton” and that he “figured the guitar was easier.”

I picked a lotta cotton (…) I was good, too. I could pick 500 pounds a day. That was hard. I figured the guitar was easier.

What are your thoughts on the passing of the legendary B.B. King?