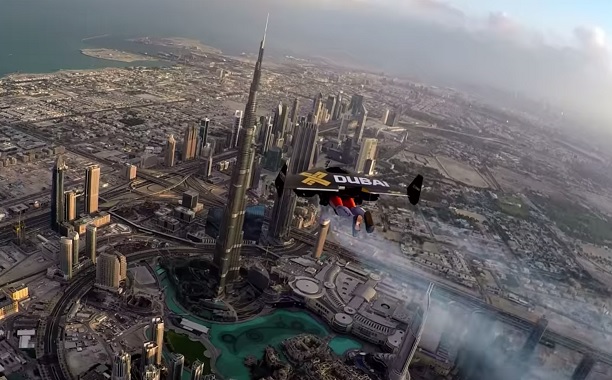 Jetman Yves Rossy and his protege, Vince Reffet, have released an awe-inspiring new video which captures their jetpack-propelled flight over the luxurious city of Dubai in stunning 4K quality and the video has quickly gone viral.

Dubai, an internationally recognized city nestled between the Persian Gulf and the Gulf of Oman, is located in the United Arab Emirates (UAE) and consists of ultramodern architecture, luxury shopping, a lively nightlife scene, and an endless array of construction projects which have gone as far as to build directly into the waters it lies on in a bid to create new waterfront property— not to mention its 828-meter-tall Burj Khalifa, which the two jetpack wearing daredevils can be seen soaring passed in the video above.

The Burj Khalifa is the tallest man-made structure on the planet.

The video was published on XDubai’s YouTube channel alongside some equally impressive extreme action-sports footage including base jumping from the world’s second highest residential structure as well as yet another video of the “Jetman” Rossy as he flies in formation via his jet-propelled wing.

Rossy, a former Swiss fighter pilot and Guinness Book record holder, was the first man in recorded history to fly with a jet-propelled wing.

In the video of the two jetmen flying high above the city of Dubai, the pair reached speeds of what The Huffington Post reported to be up to 120 mph while exhibiting impressive control over their equipment, as they managed to seemingly effortlessly maintain an impressive formation.

What are your thoughts on Jetman Dubai’s new high flying video which was created from a combination of GoPro and 4K footage?