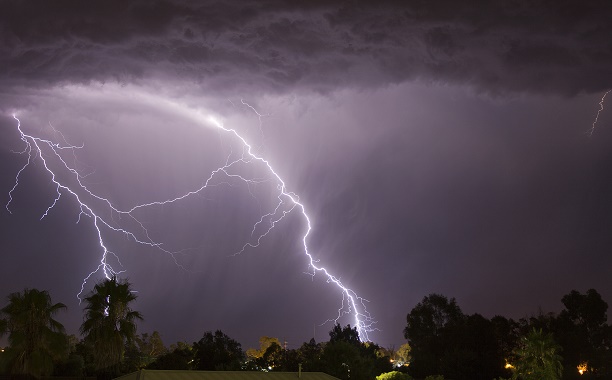 Researchers at the Southwest Research Institute have allowed us to see what thunder looks like for the first time ever.

The feat was achieved by launching a small rocket with a trailing grounded copper wire attached to it into thunder clouds, basically providing a conductive channel and a predictable path for a lightning strike. The launch was conducted at the International Center for Lightning Research and Testing at the University of Florida.

The Scientific American reports that lightning forms when electrical charges separate and build up between the clouds and the ground, or inside the clouds themselves. Thunder is the sound that is created when the resulting lightning strike suddenly heats the air.

While we understand the general mechanics of thunder generation, it’s not particularly clear which physical processes of the lightning discharge contribute to the thunder we hear. A listener perceives thunder largely based upon the distance from lightning. From nearby, thunder has a sharp, cracking sound. From farther away, it has a longer-lasting, rumbling nature (…) Because of their erratic nature, the phenomena are best studied using triggered events.

In order to snap an image of the acoustic signature of the thunder, as reported by Forbes, a specialized array of microphones designed by Dayeh, with 15 microphones spaced a meter apart, was lined up 95 meters away from the rocket launch pad, where the triggered lightning would strike.

Dayeh says that earlier experiments have managed to captured images of thunder using a handful of microphones spread over large areas. This technique, known as ranging, can pinpoint the source of a loud sound. But the latest work is the first to record the acoustic energy emitted by lightning in such exquisite detail.

What are your thoughts on this video in which thunder was captured for the first time?