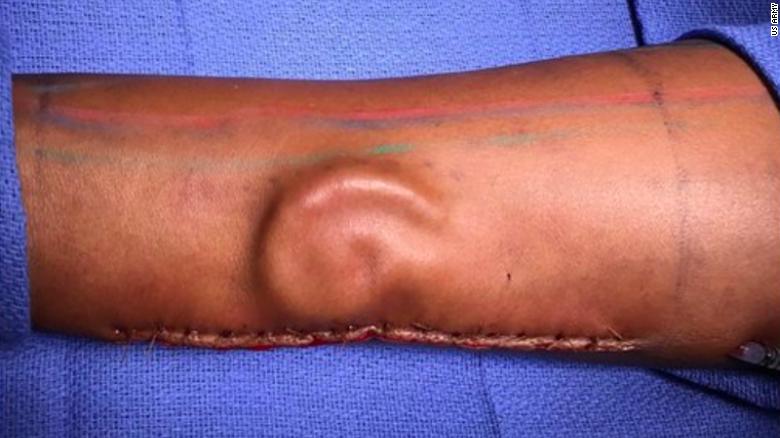 A soldier who lost her left ear in a near-fatal car accident two years ago got it back in a most unusual way.

Shamika Burrage, a 21-year-old private in the US Army, was in Odessa, Texas and driving back to Fort Bliss after visiting with her family when one of her tires blew out. Her car slid some 700 feet, then flipped over a few times before Burrage was thrown out of the vehicle. Her cousin who was with her in the car had minor injuries, but she suffered head injuries, spine fractures, road rash, and lost her ear, CNN reports.

Now, a novel procedure at the Army medical center in Texas has given Burrage back her ear by growing another one on her arm. Plastic surgeons harvested cartilage from her ribs and grew a new ear under the skin on Burrage’s forearm. Doctors at William Beaumont Army Medical Center in El Paso then successfully transplanted the organ from her arm to the side of her head.

This is the first time the technique – called a prelaminated forearm free flap – has ever been used in the army, according to Lt. Col. Owen Johnson III, chief of plastic and reconstructive surgery at William Beaumont Army Medical Center.

Some major advantages are that this reduced the chances of scarring around Burrage’s ear, and growing the ear under her skin allowed new blood vessels to form.

(The ear) will have fresh arteries, fresh veins and even a fresh nerve so she’ll be able to feel it.

Burrage said that she had resigned herself to living with a prosthetic ear, but did not like how it looked. She then looked at other options, but when Johnson and other surgeons initially proposed the idea of growing an ear in her arm, Burrage was shocked.

She said, “I didn’t want to do (the reconstruction) but gave it some thought and came to the conclusion that it could be a good thing. I was going to go with the prosthetic, to avoid more scarring but I wanted a real ear. I was just scared at first but wanted to see what he could do.”

Johnson said, “The whole goal is by the time she’s done with all this, it looks good, it (has feeling), and in five years if somebody doesn’t know her they won’t notice. As a young active-duty soldier, they deserve the best reconstruction they can get.”