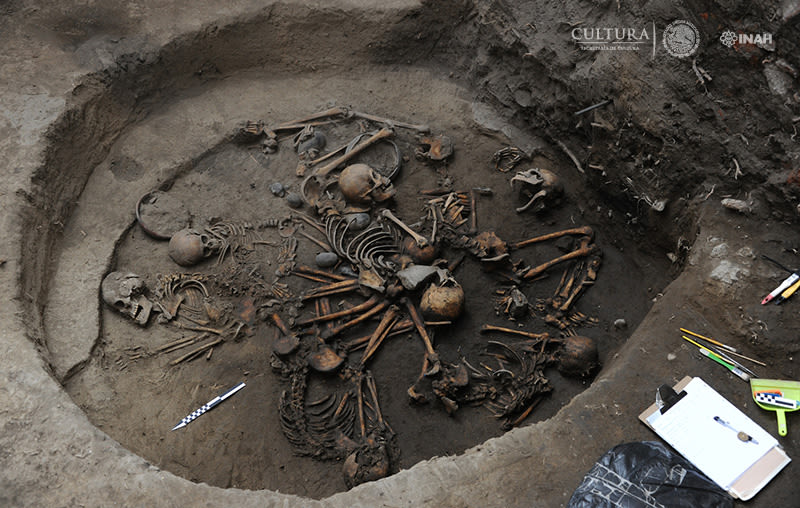 Mexican archeologists have found a burial site that is 2,400 years old containing a bizarre sight: ten skeletons formed in a circular pattern with the body parts interlocked. The researchers say they have never seen anything like it, and signs point to a previously unknown ritual among the ancient people.

The astounding discovery was made near the center of Tlalpan, a city south of Mexico City. An ancient village was discovered here in 2006, and archeologists with Mexico’s National Institute of Anthropology and History (INAH) have been excavating around it since, Gizmodo reports. The bodies were found some four feet under a building at the Pontifical University of Mexico, which used to have classrooms, a chapel, and a dorm for priests.

Of the ten skeletons, INAH archeologists have confirmed that there are two females, a male, a child, and a baby. At least two skeletons showed deformed skulls, and some had intentionally misshapen teeth, a preliminary analysis stated. There were also clay pots and rounded bowls with small circular openings found at the site.

Cranial deformation among the ancient Mesoamericans is not new. These signs were most probably done to show group affiliation, demonstrate social status, or as an ornamental enhancement. But it’s the way the bodies were positioned in the grave that is striking.

The skeletons were placed in a spiral formation around a concentric figure, much like a wheel.  Jimena Rivera, director of the Project of Excavation and Archaeological Salvage at the Pontifical University of Mexico, said,

She said they were related, adding that there were no previous records of “a burial with that arrangement.”

The exact purpose of the grave remains unknown, but researchers think it was part of some elaborate ritual. Rivera said, “We believe that it could be some interpretation of life, because individuals have different ages: There is a baby, a child, an infant, some young adults, adults, and an older adult.”