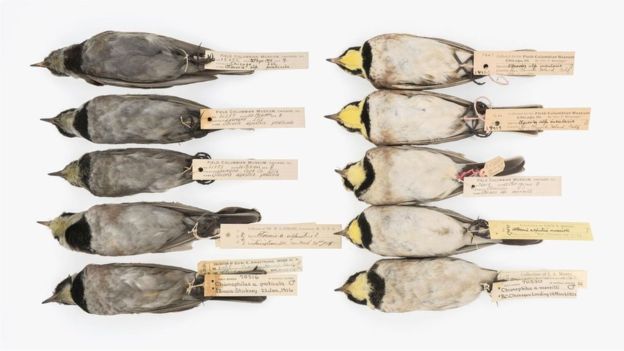 Soot that accumulated in the feathers of songbirds for the past 100 years has caused scientists to re-evaluate their records of air pollution in the United States.

Researchers measured the black carbon they found on 1,300 larks, sparrows and woodpeckers in the past century, creating the most comprehensive picture of historic air quality in the most industrial parts of the country, the BBC reports. The study also expands on current understanding of historic climate change.

Black carbon is a major component of soot, and is produced through burning fossil fuels such as coal. This became a big problem as industrialization swept Europe and North America at the end of the 19th century.

Unregulated burning soon resulted in cities coated in sooty air. And while the drastic effects of black carbon on the health of people living in urban areas has been known for decades, it has only been in recent years that scientists have understood what role this substance has on climate change.

When suspended in the air, black carbon absorbs sunlight, adding to the warming atmosphere. When it hits the ground, it runs up meting time of snow and ice, and has been linked to the loss of ice in the Arctic.

Scientists have had difficulty finding accurate records of the amount of black carbon emitted in the manufacturing belt around Chicago, Detroit and Pittsburgh towards the end of the 19th century. They turned to natural history collections in museums in the area to measure evidence of black carbon that was trapped in the feathers and wings of birds.

Using this method, the researchers were able to accurately estimate how much soot was on each bird by taking photos and measuring the amount of light reflected off each specimen. Shane DuBay, from the Field Museum and the University of Chicago and co-author on the study, said,

We went into natural history collections and saw that birds from 100 years ago that were soiled, they were covered in soot.

He added, “We saw that birds from the present were cleaner and we knew that at some point through time the birds cleaned up – when we did our first pass of analysis using reflectance we were like wow, we have some incredible precision.”

Their analysis revealed that black carbon levels were highest during the start of the 1900s, and that the air quality then was worse than previously thought. DuBay said, “The big finding and implication of our study is that we are recovering relative concentrations of atmospheric black carbon that are higher than previously estimated from other methods. It helps constrain and inform how we understand the relative role of black carbon in past climate and by understanding that we can more accurately model future climate scenarios.”

The study was published in Proceedings of the National Academy of Sciences (PNAS).