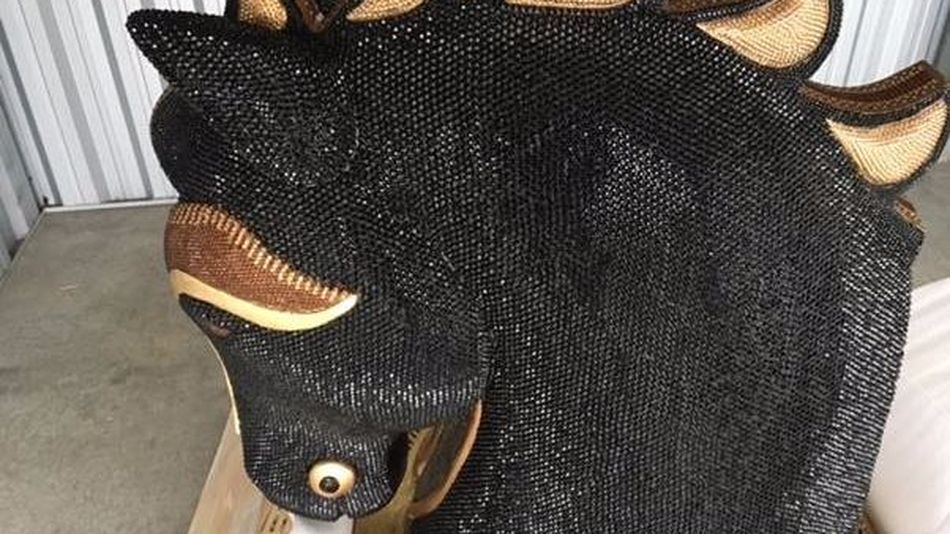 The biggest cocaine haul in New Zealand history was found by police authorities in a bizarre place: the inside of an 881-pound horse’s head encrusted with diamantes – like an eerie resemblance of that infamous scene from The Godfather movie.

Officials in Auckland said that the horse sculpture arrived from Mexico in May. When it was opened, it contained 35 bricks of high-quality cocaine totaling a hefty US $11 million, NBC News reports.

Two men who have yet to be identified – a 56-year-old American and a 44-year-old Mexican – were arrested Friday night in connection with the drug trafficking at Auckland International Airport, New Zealand authorities confirmed. A 29-year-old- Mexican was arrested on the same charges in Christchurch.

Additional search warrants were released in Christchurch following the arrest, and police released surveillance footage on Sunday of a man with a “Spanish-sounding accent” who may be connected to the drug operation.
Detective Senior Sergeant Colin Parmenter said the usual cocaine seized by law enforcers in New Zealand only amounts to 250 grams per year, or about half a pound. This horse sculpture has broken those records by far.

Parmenter says it’s a troubling sign, as the massive amount means there is a rising demand for cocaine in the country, even while it’s possible that the shipment was meant to be sent on to another country.

Police believe some of the cocaine might have been bound for Christchurch, where the demand for illegal drugs has supposedly increased since the 2011 earthquake. The NZ Drug Foundation officer Ross Bell says the rise in imported drugs could have a link to the arrival of workers doing cleanup in the disaster’s aftermath, Vice.com reports.

Cocaine is not a drug widely used in New Zealand. The NZ Drug Foundation reports that only 3.6% of the population has tried the drug, and that obtaining cocaine anywhere in the country is actually quite difficult.

New Zealand authorities seem to be having a busy year for drug busts. Just last month, police seized another record-breaking amount of drugs, this time in the form of 448 kilograms of methamphetamine.