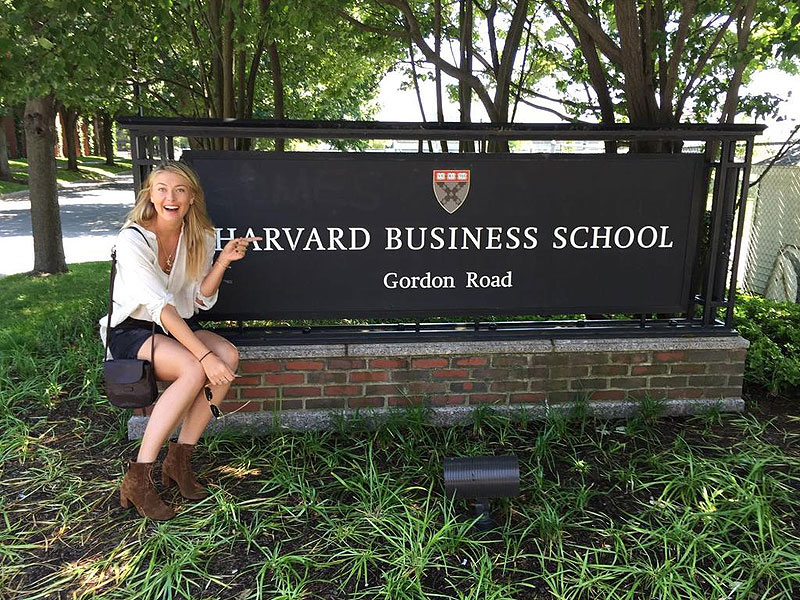 Tennis star Maria Sharapova might be on a two-year hiatus from her beloved sport, but she’s not wasting any time in the interim. A report from CNN states that Sharapova has enrolled for a course at the prestigious Harvard Business School.

Sharapova, 29, posted a photo of herself at the gates of the school’s Cambridge, Massachusetts campus on Facebook and Twitter last week. The Harvard Business School’s admission procedures are known to be tough, with an acceptance rate of only 11% from its 2016 applicants.

According to People, Sharapova is set to participate in a two-week program. Max Eisenbud, her agent, said that the program involves two classes on the Harvard Business School’s campus, though it’s unclear what qualifications she gets.

The five-time grand slam champion and former No. 1 in the sport has an estimated net worth of $195 million, with her name as a brand on the likes of candy products.

The athlete tested positive for the drug Meldonium during the Australia Open in January, a medication that is said to help endurance and rehabilitation in athletes. It was put on the list of banned substances in early 2016.

Following the positive test, Porsche and TAG Heuer dropped Sharapova as their endorser, while the United Nations also suspended her status as a goodwill ambassador with its Development Program, which Sharapova had previously described as “one of my proudest contracts ever.”

Sharapova is prohibited from playing until January 25, 2018, though her side has launched an appeal to the Court of Arbitration for Sport (CAS). The Russian superstar said she has been taking the heart medication since 2006, and was not aware that it had been added to the World Anti-Doping Agency (WADA) banned list.

The CAS is expected to deliver a ruling this July 18. Nonetheless, Sharapova seems to have her life on track regardless of what the results may be.