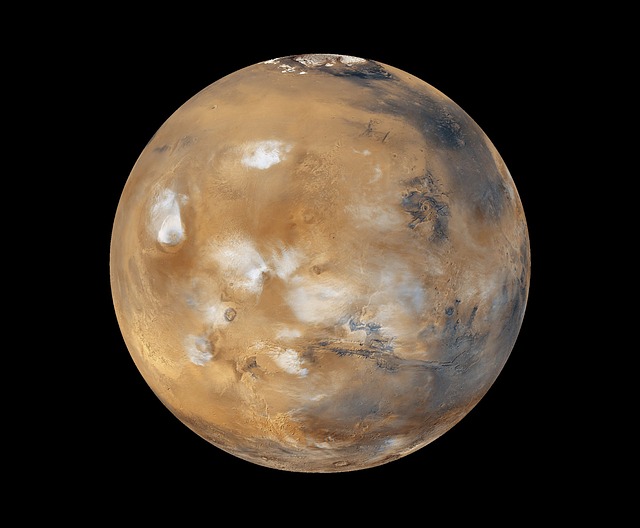 A new study says that Mars is coming out of its own Ice Age. Studying the Martian climate and tracking its changes over time can help scientists plan future mission to the Red Planet better. It may even help researchers understand the Earth’s own climate changes, the study notes.

Previous models have already theorized that Mars has undergone several ice ages in its past, but there has been little physical data to corroborate them.

This study is the first to map the ice deposits on Mars’ north and south poles and to conclude that it is indeed emerging from an ice age that began almost 400,000 years ago.

The study authors also computed how much ice was present in both poles. The results were that the amount of ice present was so massive that if it were to be spread over the entire planet, Mars would be covered in a layer of ice two feet thick.

Isaac Smith, co-author on the study, says that studying Martian climate change is important as it gives scientists a better understanding of how ice and water behaved through time on Mars. This can then provide a window into how Mars went from being a wet world to the harsh and barren conditions is now has. It can also predict where ice deposits can be found, which is a factor if people are sent to live on Mars in the future. “We want to know the history of water,” Smith says. “At some point, we’re going to have some people there and we’d like to know where the water is. So there’s a big search for that.”

Since Mars is the most similar planet to Earth, climate change on it can become a good testing ground for climate research, because Mars has no people polluting its atmosphere. “Mars is a very good laboratory for what happens on Earth,” Smith says. “Climate science actually has a very simple but perfect laboratory in Mars, where we can learn about the physics of climate change and then apply what we learn to Earth.”

Like the Earth, Mars has a cycle of climate changes and ice ages. But unlike this planet, Mars’ climate change is affected primarily by its “tilt.” Earth’s axis is tilted 23.5 degrees and is stable, varying only a few degrees over long periods of time. But Mars is tilted 25 degrees and shifts between 10 to 40 degrees, because Mars does not have a moon as big as Earth’s to stabilize its orbit and it’s closer to Jupiter’s gravity, which affects its rotation. When a planet’s axis is more tilted, the north and south poles get more sunlight and are warmer, letting the ice melt to the mid-latitudes. That’s when Mars undergoes an ice age.

The study conducted was based on predictions that this kind of shift happened 400,000 years ago. Using radar instruments onboard the Mars Reconnaissance Orbiter, a spacecraft circling Mars, the researchers analyzed radar images of the ice deposits on the Red Planet’s polar caps. They pinpointed signs of erosion and “spiral troughs” created by winds. These features can reveal how ice accumulated and moved through time.

The study’s theory was confirmed that an ice age did end 400,000 years ago and since then, 87,000 cubic kilometers of ice have accumulated at the poles. This exciting development means that Mars’ climate is still actively changing and that Mars is a planet that is alive.