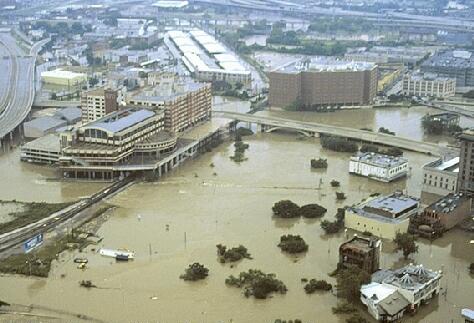 Houston- As torrential rains continue to torment the residents of Houston, authorities may be looking into the face of an even more fearsome enemy. New fears have been expressed over the safety and stability of two major dams located on Houston’s West Side. The two dams, Baker and Addicks, were constructed in the 1940’s primarily to store up excessive rainfall and keep it from flooding the city. Water from the dams is slowly released periodically into downtown Houston.

According to statements from the US Army Corps Engineers, the two dams are classified as extremely high risk. The Houston Chronicle estimates that an unprecedented death toll and up to $60 Billion in losses from damages would be the outcome if the dams should collapse. These figures were also confirmed by Richard Long, one of the project operations managers with the US Army Corps, who went on to say that they are however not very worried about the possibility of a collapse.

Mr. Long expressed confidence that improvements to the 70-year-old dams made in recent years along with an ongoing construction project worth $72 Billion should ensure that the dams can literally weather the storm and survive.

“This is a mind-boggling situation,” was the comment made by Jim Cantore, a storm tracker working for The Weather Channel.

According to the figures provided in a weather service report, water levels in the two dams have already surpassed both their previous records which were witnessed in March 1992. Water levels in the Baker reservoir- which topped out at 97.46 feet in 1992- were already at 101.4 feet and are expect to crest at 103.2 feet. The Addicks Reservoir, on the other hand is now at 93.8 feet and is expected to crest at 97.7 feet against its 93.6 feet record.

Early this week Texas Governor Greg Abbot declared a state of emergency in nine counties as residents continued to seek relief from the torrential rains.