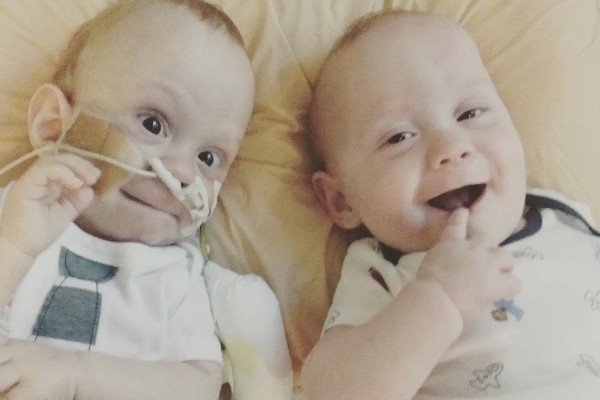 A formerly conjoined twin who was born attached to his brother is headed home after having been released from the hospital.

The recently released twin, Conner Mirabal, was discharged from the Wolfson Children’s Hospital on Wednesday. At the time of his release, he weighed in at a “healthy” 22 pounds, the Daily Mail reported.

While Conner’s brother Carter recently weighed in at 16 pounds, the mother of the two boys, Michelle Brantley, claims they’re both doing just fine. Doctors overseeing Carter’s recovery confirmed that he’s doing, but noted that he still has some ground to cover before he can be released from the hospital.

Conner and Carter were born to 24-year-old Michelle Brantley and her 26-year-old fiance Bryan Mirabal. News of the pregnancy reportedly came as a complete surprise to Michelle–who had just given birth eight months prior to her first son Gage–as she was on a birth control shot considered to be effective 99 percent of the time.

Before their conjoined twins were born, Bryan and Michelle were told by healthcare professionals that there was a chance neither of the boys would survive pregnancy.

In order to separate the two boys who were conjoined from the chest to lower abdomen, a 17-member surgical care team conducted a high risk, nine-hour operation.

With only a 25 percent chance of surviving the high risk operation, the boys managed to survive.

The overall survival rate for conjoined twins is between 5 and 25 percent.

Conner’s recent release marks the beginning of his first full day at home with his family. His father indicated at a news conference on Wednesday that he was looking forward to getting to spend some time with his son outside of the hospital, ABC News reported.

One such healthcare professional, pediatric surgeon Dr. Daniel Robie with Wolfson Children’s Hospital, was quoted by ABC News as having said that it is “going to be difficult” to give up Conner after having spent the last year plus seeing him on a daily basis.