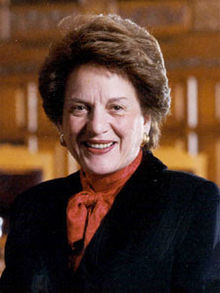 The first woman to serve on New York’s top court as the chief justice, Judith Kaye, has died.

Kaye, who retired back in 2008, was battling an ailment, sources told the NY Daily News. She was 77-years-old at the time of her death.

Acting Court of Appeals Chief Judge Eugene Pigott indicated in a Thursday morning statement that Kaye, who was appointed chief judge of the Court of Appeals back in ’83 by then Governor Mario Cuomo, had “served tirelessly and compassionately for over 25 years” before her departure.

She died on Wednesday night, according to Pigott’s statement.

“She served tirelessly and compassionately for over 25 years […] The Court of Appeals and the entire New York State Court System is saddened by her loss. She has been an inspiration to all of us who were privileged to know her and she will be greatly missed.

New York State Senator Andrea Stewart-Cousins, the first woman in the history of New York to lead a conference in Albany, was quoted by the San Francisco Chronicle as having referred to Kaye as “a towering figure” in the state of New York.

Kaye was appointed to the appeals court by Cuomo following the resignation of her predecessor, Sol Wachtler.

Wachtler’s resignation occurred while he was under federal indictment for allegedly threatening an ex-lover and her daughter.

Senate Democratic Leader Stewart-Cousins was quoted by the NY Daily News as having said that she’s “deeply saddened” by Kaye’s passing while noting that she had “helped move” New York “forward on a wide variety of social and legal issues” in her lifetime.

Judge Judith Kaye was a towering figure in New York State and I am deeply saddened at her passing […] As the first woman to serve on the New York State Court of Appeals and the first woman appointed as Chief Judge, Judith Kaye helped move our state forward on a wide variety of social and legal issues, including juvenile justice, rights for gay couples, capital punishment and creating specialized courts to focus on issues such as domestic violence, chemical addiction and mental health […] My thoughts are with her family and friends during this sad time, though I hope they take solace in knowing that Judge Kaye’s legacy will live on and her dedication to this state will help inspire generations of New Yorkers to serve this great state and the cause of justice.

Eric J. Friedman, an executive partner at Skadden, Arps, Slate, Meagher & Flom — the firm at which Kaye worked for six years until her recent death — provided us with the following statement:

Judge Kaye’s life was one of service to the state of New York, the legal system, the legal profession and the children of New York; her contributions cannot be overstated. The first woman to ever serve on the New York Court of Appeals, and the court’s longest-serving chief judge, she was a true pioneer. We have been honored to have her as our colleague and friend over the past six years. She will be deeply missed.

What are your thoughts on the passing of Judith Kaye?