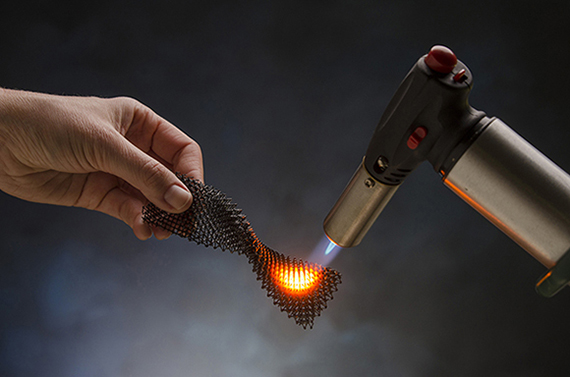 Researchers at HRL Laboratories have invented a new resin formulation that can be used to 3D print ceramic parts that are significantly stronger than their predecessors — an innovation that may lead to hypersonic vehicles and new spaceships.

The newly invented resin can be crafted into parts of virtually any shape or size, which can then be converted into dense ceramic parts through the application of heat.

While ceramics are generally difficult to mold, at least in comparison to plastics and metals, the team behind the discovery managed to pioneer a new technique which allows them to trick the material into behaving more like a pliable plastic.

Tobias Schaedler, a senior scientist at the California based company, explained that their “pre-ceramic resin” can be printed “like a polymer, then you fire the polymer” in order to convert it into a ceramic.

We have a pre-ceramic resin that you can print like a polymer, then you fire the polymer and it converts to a ceramic (…) There is some shrinkage involved, but it’s very uniform so you can predict it.

As for its potential application, Schaedler was quoted by Discovery News as having said that in order to build hypersonic vehicles, “you need ceramics for the whole shell of the vehicle.”

If you go very fast, about 10 times speed of sound within the atmosphere, then any vehicle will heat up tremendously because of air friction (…) People want to build hypersonic vehicles and you need ceramics for the whole shell of the vehicle.

Beyond hypersonic vehicles, Schaedler indicated in a statement that the new material has a “myriad” of applications across a variety of different industries.

Our team surmounted the challenges inherent in ceramics to develop an innovative material that has myriad applications in a variety of industries.

The material crafted by Schaedler’s team, which behaves like plastic but withstands temperatures in excess of 3,092 degrees Fahrenheit (1,700 degrees Celsius), reportedly exhibits 10-fold the strength of similar materials.

The researchers published a video on New Year’s Eve in which they discussed their breakthrough in 3D printed ceramics.

According to DARPA officials, the team’s research, which was published in the journal Science, could lend a hand to gas-fired power plants and various types of gas powered engines.

In order to create the new material, the team behind its creation employed a $3,000 3D printer to print layers of plastic-esque material from the resin. The layers, 100 microns thick, are created through a process in which an ultraviolet light is used to fuse monomers into polymers.

After forging a part, the team shoves it into an oven where it’s cooked in the presence of argon gas at a temperature of 1,832 degrees Fahrenheit (1,000 degrees Celsius). The application of heat essentially strips any unnecessary chemical groups from the material, which leaves behind what Popular Mechanics reported to be a strong ceramic framework.

In other news, a UCLA led team of scientists recently created a new magnesium-based metal by infusing the metal with strength-enhancing ceramic nanoparticles.