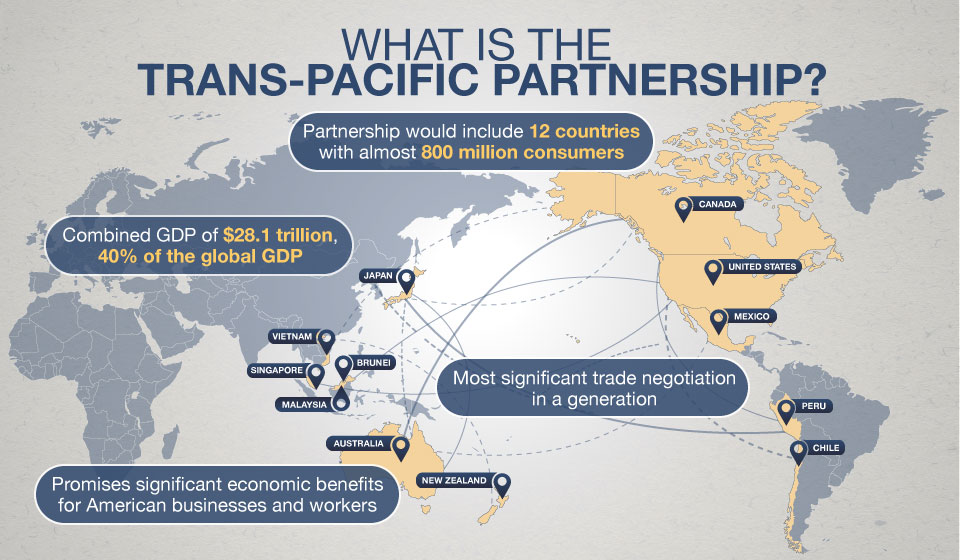 Trade ministers from twelve countries announced on Monday morning that they had successfully negotiated the historic Trans-Pacific Partnership Agreement. The agreement, which is the largest regional trade accord in history, helps define trade relations and regulations in the Asia-Pacific region, with member countries including the US, Australia, Canada, Japan, Malaysia, Mexico, Peru, Vietnam, Chile, Brunei, Singapore, and New Zealand.

Officials met for most of the past week in Atlanta to work out details of the agreement, the conclusion of which ends five years of talks between member nations. The Trans-Pacific Partnership Agreement covers 40 percent of the world’s economic output, with significant features including the reduction or elimination of certain tariffs, standard-setting for minimum wages and working conditions, the establishment of investments between member countries, and the creation of environmental protection policies.

Regardless of the benefits announced by the US Trade Representative, there has been some opposition in each of the twelve member countries. The next several months will require debate in each nation, as well as an agreement on the proposed timeline for putting various aspects of the agreement into effect.

The New York Times claims that opposition to the Trans-Pacific Partnership Agreement in the United States is coming from conservatives and liberals alike. Some labor unions and liberal activists believe that the agreement supports large corporations, while Donald Trump has called the accord “a bad deal.” The accord has been an important component of Obama’s economic program to expand American exports, and also stands as a major achievement for the President’s foreign policy goal of increased trade relations with eastern Asia.

The TPP Agreement commits all member nations to the International Labor Organization’s standards for collective bargaining, minimum wage and workplace safety, and regulations against forced labor, child labor, and overly long work hours. The agreement includes stipulations against wildlife trafficking, illegal fishing and logging, and puts in place various protections for marine species and land mammals. And for the first time in trade agreement history, the agreement proposes the creation of a committee to help small businesses overcome trade barriers.