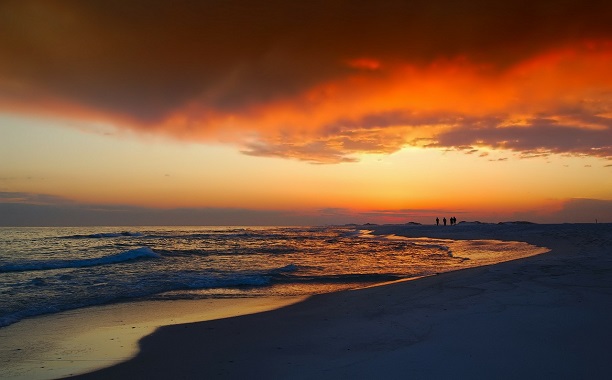 Authorities in Florida detonated an old World War II bomb on the beach today after it washed ashore and was spotted by someone walking on the beach this morning.

The barnacle-encrusted bomb washed ashore on St. Pete Beach and was discovered by a pedestrian walking by at around 8:30 a.m. near the 22nd Avenue access point.

The 4-foot cylinder bomb with its cone-shaped cap was confirmed by Sgt. Ali Rose from MacDill Air Force Base to be an M122 Photoflash Bomb, the St. Petersburg Tribune reported.

According to officials, the old bomb appeared to have been submerged for some time before washing up on the shore of St. Pete Beach.

The M122 Photoflash Bomb, as its name indicates, was one used in photography, however, the advent of satellite imagery and enhanced nighttime optics has made it obsolete. Back in its heyday, it would have been dropped from a military aircraft and detonated mid-air in order to produce adequate light for photographs.

As a result of the bomb’s early Sunday morning discovery, the Pinellas County Sheriff’s Office forced the evacuation of the beach in the area of the bomb and homes along the beach side of Sunset Way from 22nd Avenue to 28th Avenue were also evacuated, WTSP 10 News reported.

Local deputies working in tandem with the MacDill Explosive Ordnance Disposal Team employed C-4 to detonate the explosive device after setting up a 300-yard perimeter, which extended into the water.

Onlookers reportedly let out a collective gasp followed by cheers after the device was detonated by the authorities.

Perhaps surprisingly to some, this is not the first time an explosive device has washed ashore on this particular Florida beach, as an inert grenade was found by a man with a metal detector back in October. It too was covered in barnacles and appeared to have been submerged for an extended period of time.