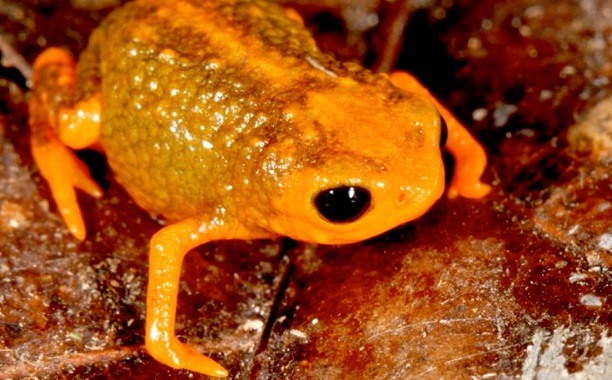 Researchers exploring the mountainous areas of the southern Brazilian Atlantic Rainforest have discovered seven new species of tiny frogs whose measurements identify them as the smallest frogs in the world.

The discovery, which was published Thursday in the journal PeerJ, comes after nearly five years of exploration in the region by a team of researchers.

The new species discovered are all of the frog genus Brachycephalus, a genus which is known for its brightly colored, miniature frogs.

Each of the seven recently discovered new species is restricted to cloud forests in either one or just a few adjacent mountaintops, which makes the endemic creatures highly susceptible to extinction, according to a press release on EurekAlert which notes that they’re particularly vulnerable to climate change induced redistributions of cloud forest.

Frogs from the Brachycephalus genus are among the smallest terrestrial vertebrates known to man, with adults commonly measuring less than a single centimeter in length. As a result, mini frogs from the genus exhibit a variety of structural changes to their bodies including a reduction in the number of toes and fingers.

The brightly colored little amphibians are possibly marked with such bright colors as a warning to potential predators which indicates the presence of a highly potent neurotoxin contained within their skin. The skin-laced neurotoxin, known as tetrodotoxin (TTX), is also found in pufferfish, ocean sunfish and others. Ingestion of the toxin usually results in rapid fatalities as a result of heart failure and asphyxiation.

Marcio Pie, a professor at the Universidade Federal do Parana in Brazil whose team carried out the series of field expeditions yielding the discovery of the new species, was quoted by National Geographic in a news report as having said that the preservation of the cloud forests in which the frogs reside “is crucial not only for conservation, but also to understand how such high levels of biodiversity were generated in the first place.”

Preserving these areas is crucial not only for conservation, but also to understand how such high levels of biodiversity were generated in the first place

In other recent South American frog coverage here at Immortal News, researchers realized that what was previously thought to be multiple frog species actually turns out to be a single species of mutating rain frog found in Ecuador’s Andean cloud forest.