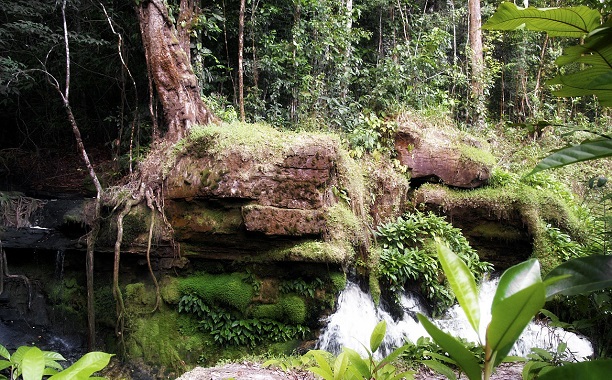 In what is now northeast Brazil, researchers have discovered a remarkably well preserved specimen of a tiny toothed bird, about the size of a small hummingbird, which is helping scientists fill the knowledge gaps on feather evolution, according to a recently published study in the journal Nature Communications.

The fossilized remains of the ancient bird, which has been yet to named, dates back 115-million years to a time when an ancient supercontinent, Gondwana, existed.

The tiny unnamed bird’s discovery offers researchers proof that they once lived in the Southern Hemisphere during what Live Science reports to have been a “critical time” in the evolution of birds.

As for the bird’s appearance, it measures in at 5.5 inches from head to tail and boasted spotted, ribbon-like tail feathers. It was discovered in what is now Brazil back in 2011. In particular, the fossilized remains of the ancient bird were discovered in the Araripe Basin, which is a sedimentary hotspot of fossils which range from 100 million to 120 million years old.

Ismar de Souza Carvalho, the study’s lead researcher and a professor of paleontology and geology at the Federal University of Rio de Janeiro in Brazil, explained that the bird has yet to be named as researchers “are still comparing it with some birds that came from other parts of Gondwana” in order to decide exactly what to name it.

We are still comparing it with some birds that came from other parts of Gondwana to decide, exactly, the name that it will have

Prior to its discovery, researchers lacked verifiable evidence that the diverse group of birds known as Enantiornithes lived anywhere anywhere but the northern hemisphere during the time on Earth. Now, with the discovery of the fossil, researchers have evidence that they existed not just in the northern supercontinent of Laurasia, but also in the south, in what once was Gondwana.

In other coverage of ancient birds here at Immortal News, researchers behind a study published earlier this year found how ancient terror birds, who lived 3.5 billion years ago in South America, stalk their prey. In an unrelated study, the fossilized remains of an ancient beaver were recently unearthed in eastern Oregon.