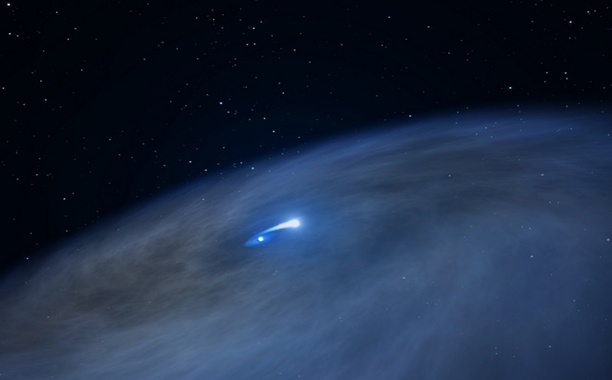 Astronomers observing the unique star nicknamed “Nasty 1” with NASA’s Hubble Space Telescope have made a startling observation: Nasty 1 has engaged in stellar cannibalism — making it a cannibal star, if you will.

Nasty was first observed several decades ago when researchers identified it as a Wolf-Rayet star, which is a rapidly evolving star that is larger than our Sun. Wolf Rayet stars rapidly lose their hydrogen-filled outer layers, which leaves their super-hot, bright helium cores exposed.

The astronomers were able to determine that the strange star, which is officially cataloged as NaSt1, has a pancake-shaped disk of gas surrounding it which is 1,000-times the diameter of our own solar system, the Milky Way. This observation was made upon closer inspection of the star via NASA’s space telescope, Hubble.

Astronomers expected to see twin lobes of gas flowing from opposite sides of the star, not the massive pancake-shaped disk of gas which they found in its place.

The gas disk is nearly 2 trillion miles wide and may have formed an unseen companion star which snacked on the outer envelope of the newly formed Wolf-Rayet.

The study’s lead author, Jon Mauerhan with the University of California, Berkeley, was quoted by NASA in a statement as having said that the disk-like observed is exciting “because it may be evidence for a Wolf-Rayet star forming from a binary interaction.”

We were excited to see this disk-like structure because it may be evidence for a Wolf-Rayet star forming from a binary interaction.  There are very few examples in the galaxy of this process in action because this phase is short-lived, perhaps lasting only a hundred thousand years, while the timescale over which a resulting disk is visible could be only ten thousand years or less.

Based on the new observations, it is believed that the star may represent a brief transitionary stage in the evolution of extremely massive stars.

A previous scenario on how Wolf-Rayet’s formed entailed the star ejecting its own hydrogen envelope in a strong stellar wind streaming with charged particles, but Mauerhan and his team’s observations of Nasty 1 show an alternative scenario: a massive star loses its hydrogen envelope to a companion star.

In a binary system, a massive star would evolve very quickly and, as it runs out of hydrogen, swell up.  This would cause its outer hydrogen envelope to become loosely bound and vulnerable to gravitational stripping from the companion star.

By cannibalizing the larger star, the more compact companion star ends up gaining mass. Meanwhile, the loss of its hydrogen envelope exposes the helium core of the larger star and it becomes a Wolf-Rayet. As the mass transfer process in binary systems isn’t always efficient, the stripped matter can spill out and create a disk around the binary.

Mauerhan, who believes that this is what we’re seeing with Nasty, indicated in a statement that this kind of “sloppy stellar cannibalism actually makes Nasty 1 a rather fitting nickname” for the unique star.

That’s what we think is happening in Nasty 1 (…) We think there is a Wolf-Rayet star buried inside the nebula, and we think the nebula is being created by this mass-transfer process. So this type of sloppy stellar cannibalism actually makes Nasty 1 a rather fitting nickname.

Given that a minimum of 70 percent of massive stars are members of double-star systems, the binary interaction model — as seen in Nasty 1 — is gaining traction among astronomers.  Also, direct mass loss alone can’t account for the number of Wolf-Rayet stars observed in relation to other less-evolved massive stars in the galaxy.

In other Hubble coverage here at Immortal News, researchers from the University of Notre Dame used the space telescope to discover a massive halo of gas surrounding the Andromeda Galaxy.

What do you think of Nasty 1’s stellar cannibalism?