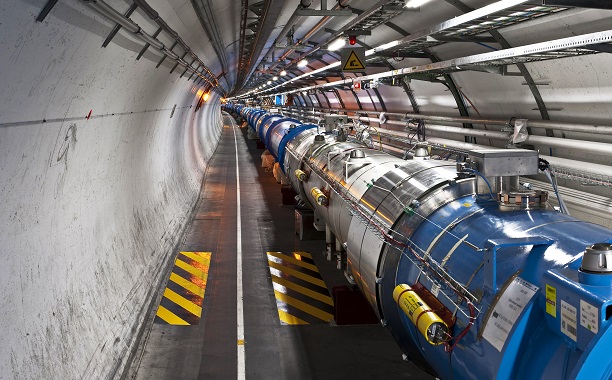 The largest particle accelerator in the world, the Large Hadron Collider (LHC), which was successfully restarted back in April after having been delayed by a short circuit, broke its previous energy level record during its Wednesday test run, CERN announced on Thursday in a statement which read:

Last night, protons collided in the Large Hadron Collider (LHC) at the record-breaking energy of 13 TeV for the first time.

The test collisions, which were used to set up systems designed to protect the particle collider and its detectors from stray particles which slip away from the beam, ran at a record-breaking energy level of 13 TeV.

Collimators are the devices employed by the LHC to absorb stray particles.

CERN indicated in its update that the data derived from the recent test collisions will allow the LHC team to ensure that the magnets and detectors are fully protected from wandering particles.

The tests continued into Friday, as the beams continued to collide for several hours while the LHC Operations team monitored the beam quality and assessed the efficiency of the present configuration.

Housed in a 17-mile tunnel on the French-Swiss border, the Large Hadron Collider allows beams containing billions of protons traveling at 99.9 percent the speed of light to fly through the collider in opposite directions. Powerful magnets are then used to bend the beams in such a fashion as to induce a collision at specified points throughout the track— points at which researchers have setup an array of sensory equipment to monitor the collisions.

The LHC’s second run is planned for early June, according to the European Organization for Nuclear Research.

The collider’s experiments are geared towards unveiling clues to the secretes behind the universe as they allow researchers to study the fundamental particles—building blocks of matter—and the forces which govern them.

The LHC was previously used to prove the existence of the God particle, which is formally known as the Higgs Boson. The discovery earned two of the scientists who theorized the particle’s existence back in 1964 the 2013 Nobel physics prize.