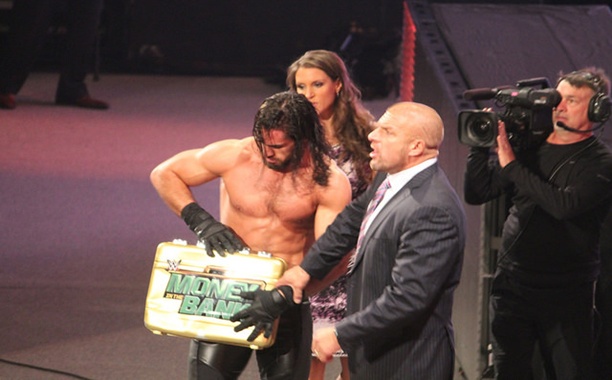 Seth Rollins retained his WWE World Heavyweight Championship last Sunday during the Payback pay-per-view. He also debut a new finishing move when he employed Triple H’s Pedigree on Randy Orton to get the pin.

As reported on The Independent, Rollins had a 25-percent chance of retaining his title during the Fatal Four-way match at Payback facing Orton and his former Shield brothers Roman Reigns and Dean Ambrose.

The three men in the ring were not the only ones with a grudge against Rollins, as outside of the ring lurked Authority cohort Kane. As reported in The Mirror, Kane has been butting heads with Rollins for weeks now, but was warned by Triple H that if Rollins failed to retain the title, Kane would no longer be director of operations.

Initially, it seemed Kane’s dislike of Rollins would reign supreme, but he eventually came to Rollins’ aid as he saved him from Reigns’ Superman punch.

Despite some tension in the weeks leading up to Payback — Ambrose hit Reigns with his Dirty Deeds finisher on the last Raw and rumors abounded about a heel turn for one or the other, the two former Shield members displayed a cohesive front.

There was even a brief Shield reunion in which all three members teamed up to triple power bomb Orton through a table before Ambrose and Reigns turned on Rollins and took out both him and Kane.  The two then went at it one-on-one before Rollins and Orton got back in the ring.

More interference from Kane saw Ambrose and Reigns incapacitated while J&J Security distracted Orton, earning RKO’s for their troubles.  Rollins was then able to use Triple H’s Pedigree finisher on Orton for the win.

Rollins has been lacking a definitive finisher since April when Wrestle Zone reported that the WWE felt his Curb Stomp finisher put his opponents in risk of head injuries.

Triple H has taken a mentor role for Rollins ever since he turned on Shield last June to join the Authority.  Given Payback ended with The Game coming out to congratulate Rollins, it would seem that he is endorsing Rollins use of the Pedigree.

Rollins used the Pedigree again this past Raw, landing the finisher on Ambrose —who is to be his opponent in the upcoming Elimination Chamber pay-per-view, according to Bleacher Report.

Last week here at Immortal News, we covered news of the Elimination Chamber returning and the now vacated IC title to be defended during the event.

What do you think about Rollins using the Pedigree?