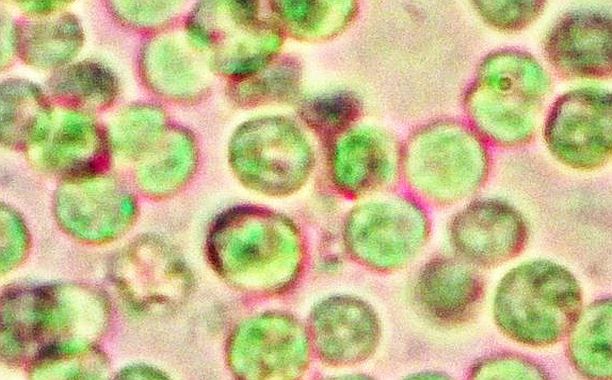 Going to the beach may have just gotten even better. Not only is there ice cream, sunny days, sand and a nice ocean spray, but that ocean spray might be a significant contributing factor when it comes to combating global warming.

In a study published yesterday in the journal ACS Central Science, researchers from Scripps Institution of Oceanography constructed an “artificial ocean” and analyzed its chemical composition as well as movement. The tank they constructed, which was assembled back in 2014, holds 3,400 gallons of Pacific Ocean water and is 33 meters (~108 ft) long.  Using this tank, the researchers were able to monitor the activity of microorganisms that live in the ocean – particularly phytoplankton (pictured above).

Their findings show that the fats and lipids left uneaten by phytoplankton are then churned by the ocean and scattered into the atmosphere. This organic combination may be a determining factor in how reflective clouds are. Put simply: the more reflective a cloud is, the more solar energy it can reflect away from the earth, which can then have “profound impacts on climate over a large portion of the planet,”  Kimberly Prather, a distinguished chair in atmospheric chemistry at Scripps.

It is exciting to finally be able to find a connection between microbes in seawater and atmospheric sea spray (…) These chemical changes ultimately affect the reflectivity of marine clouds and thus could have profound impacts on climate over a large portion of the planet.

If you remember your Al Gore documentaries or Futurama at all, global warming is increased by the atmosphere’s inability to absorb greenhouse gases, which then in turn hang around in the atmosphere to trap heat continually in the Earth. The ocean can act as a huge filter to help reduce the amount of greenhouse gases, and this research could be a big step toward helping the Earth along in that goal.

The group is also considering research into human health benefits, since people who frequent beaches or live near them are inhaling this sea spray as well. Hopefully we’ll learn even more about how these tiny plants can benefit the Earth in such a big way.

What are your thoughts on this study’s findings regarding sea spray and its impact on global warming?