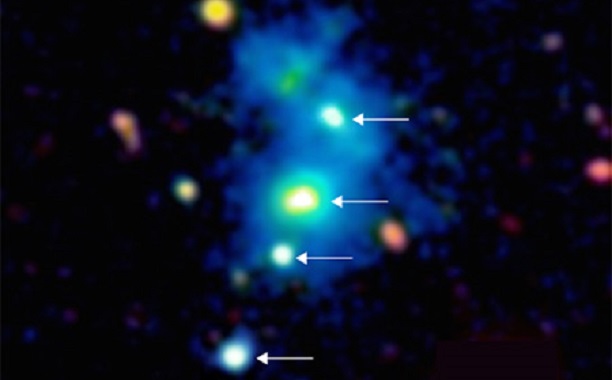 An “extremely rare” cluster of four quasars in a single nebula has been spotted by astronomers at the Keck Observatory in Hawaii and the discovery has left astronomers puzzled, as the odds of such are a gathering are reportedly ten million-to-one.

The study’s first author, Joseph Hennawi of the Max Planck Institute for Astronomy (MPIA) in Heidelberg, Germany, was quoted in by The Register as having said that such an extremely rare discovery has “the power to overturn long-standing theories.”

If you discover something which, according to current scientific wisdom should be extremely improbable, you can come to one of two conclusions: either you just got very lucky, or you need to modify your theory (…) Extremely rare events have the power to overturn long-standing theories.

According to current scientific wisdom, quasars — quasi-stellar-objects — are an extremely rare phenomena which occur when an adequate amount of matter falls into the accretion disc around a supermassive black hole, which subsequently generates an enormous amount of energy which can be observed through a telescope. Such remote celestial objects tend to have a star-like appearance when viewed through a telescope.

It has been suggested that quasars not only contain massive black holes with them, but that they might actually represent an evolutionary stage in some galaxies.

Back to the four recently discovered quasars which were spotted roughly 10 billion light years away in a giant nebula of dense hydrogen gas, which was irradiated by the quasars themselves. The recent discovery, which was published on May 15 in the the journal Science, was derived from observations made using the 10-meter Keck I Telescope located at the W. M. Keck Observatory.

In regards to the location of the discovery, professor of astronomy and astrophysics at UC Santa Cruz, J. Xavier Prochaska — who was part of the team of astronomers who discovered the extremely rare quasar cluster — was quoted in a UCSC news report as having said that the region of space where the quasars were found has “several hundred times more galaxies” in it “than you would expect to see” at such a distance.

In other space coverage here at Immortal News, astronomers discovered a galaxy 13.1 billion light years away and it just so happens to be the oldest one yet.What are your thoughts on the recently discovered quadruple quasar?