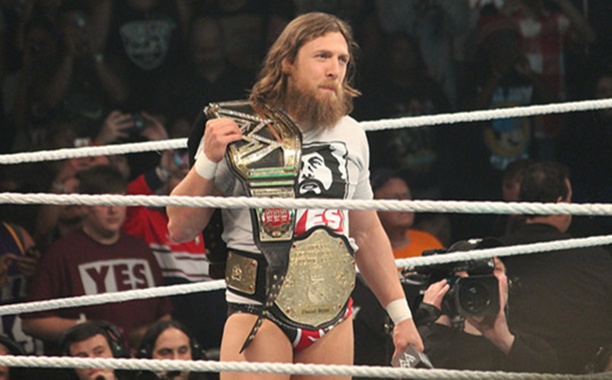 Intercontinental Champion Daniel Bryan returned to television on this week’s RAW – unfortunately it was to announce he’d be out indefinitely.

BBC reports that Bryan told fans on Raw that he had an MRI scan last week and the results were not good.  He then laid his championship down on the ring and told the audience that they deserved to see WWE Superstars fighting to be IC champ.

The Intercontinental Championship should not be sitting on a physical therapists chair.  It deserves to be in this ring and in this ring is where I am going to leave it.

Bryan won the IC title in a ladder match at Wrestlemania 31 at the Levi’s Stadium in California, an event attended by 76,976 fans from 50 U.S. states and 40 countries, according to a report on the International Business Times.

According to Bleacher Report, Bryan has been having problems with his shoulder and neck. He has been out of action since April when he was pulled from the WWE’s European tour.  He was also removed from April’s Extreme Rules pay-per-view after failing to receive medical clearance.

This is the second time Bryan has had to relinquish a championship due to injury.  Roughly a year to this day he was laid up by neck surgery.  That time, he was forced to relinquish the World Heavyweight Championship.

There is no word when and if Bryan will be able to return to in-ring competition.  Meanwhile, Daniel Bryan fans will be able to see him in the rebooted wrestling reality television series Tough Enough. According to SB Nation, Bryan will be part of the show’s panel when it begins airing in June.

WWE has announced that the vacated IC championship will be defended during a pay-per-view Elimination Chamber event that will air exclusively on the WWE network on May 31. This will be the second pay-per-view event for May following WWE Payback on May 17.

The IC match and a Tag Team Champions match are the only events announced so far for the Elimination Chamber.

Last week, Immortal News reported on the possibility of Daniel Bryan being injured and having to relinquish his IC championship.

What do you think of Daniel Bryan giving up his IC title?