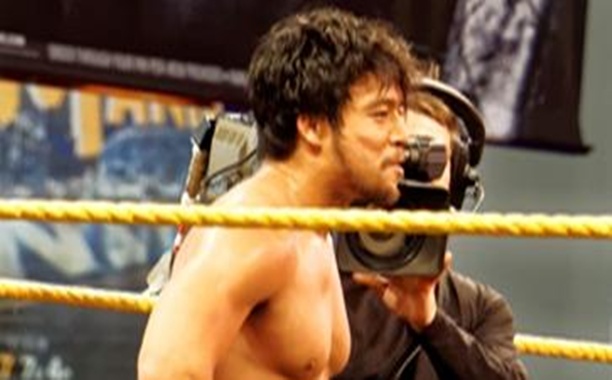 NXT superstar Hideo Itami is the latest member of the WWE roster to be reported out with a shoulder injury.

PWInsider reported that Itami will be out of action for 6-8 months.

Itami is the second NXT superstar this week to be felled by a shoulder injury.  Former NXT champion Sami Zayn also hurt his shoulder during his first solo match on Raw.

During the May 4 show in his hometown of Montreal, Canada, Zayn answered John Cena’s U.S. Championship Open Challenge. His injury was caught on camera but Zayn finished the match nonetheless.

The WWE released a statement confirming Zayn had injured his shoulder during the match and would be undergoing an MRI to determine the nature and extent of his injury.

Zayn already spent most of this March and April out with shoulder issues. No official update on Zayn’s condition has been released, but according to PWInsider, it could be a torn rotator cuff.

Itami and Zayn’s injuries could impact the NXT Takeover Unstoppable special on May 20.

Zayn is scheduled to challenge Kevin Owens for the NXT Championship while Itami, along with Finn Balor and Tyler Breeze is in a Triple Threat Number 1 contender match.

When news of Zayn’s injury broke, it was rumored that the winner of the  Triple Threat would find himself challenging Owens later that evening.

Now, with Itami possibly out of the equation, the Triple Threat could be canceled.

What Culture reports that the match line up could be changed to Balor vs. Breeze with the winner to face Owens.

Currently, there has been no changes announced for Unstoppable, which according to some reports, is because NXT shows are taped in advance and the WWE is waiting for the last set of NXT taping before the injuries happened to air in order to keep the show progressing in real-time.

What do you think will happen during Unstoppable?