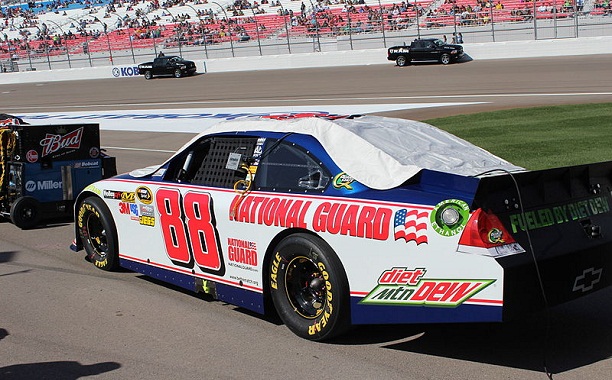 It had almost been 11 years since Dale Earnhardt Jr. last tasted victory at Talladega Superspeedway, but the fan favorite racer finally ended his drought by winning the GEICO 500 on Sunday.

Earnhardt Jr. started in fourth position and trailed pole-sitter Jeff Gordon and Jimmie Johnson in the early parts of the race. He then overtook both of them and finished in first place after leading the final 67 laps of the 188-lap contest.

Widely believed to be NASCAR’s most likable driver, Earnhardt Jr.’s victory pleased everyone. Fans unanimously cheered for him and stayed long after the race was over to show their support for the son of the legendary Dale Earnhardt Sr.

The 40-year-old responded with an emotional interview after his big win, saying:

It’s just real emotional. I haven’t won here in a long time (November 2004), my daddy’s birthday was a couple of days ago. It was real emotional. Everything is so good for me right now. I don’t know why I don’t feel like I deserve it. I just feel overcome with a lot of emotion. I’m just blessed. Everything’s going so great.

Before Sunday’s win, Earnhardt hadn’t finished first at Talladega since 2004. He now has six victories at the event and looks to be in the pursuit of his late father’s record total of 10.

The race didn’t just have the result the fans wanted but it also delivered the action they so craved. In the 47th lap, for example, there was a major pile-up involving 15 cars for which Trevor Bayne was to blame. It affected a number of big names but Earnhardt steered clear, thanks to him being in the lead and ahead of the chasing pack.