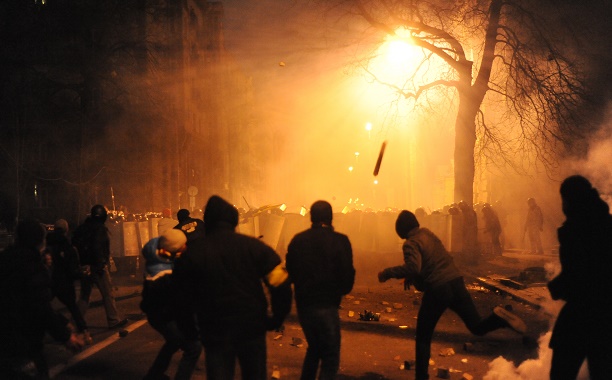 Baltimore police Capt. Eric Kowalczyk said in an interview picked up by Huffington Post, “We will find the people that are responsible.”

We will find the people that are responsible, and we will put them in jail (…) they have broken bones, one of them is unresponsive. This is not okay (…) You’re gonna see tear gas, you’re gonna see pepper balls.

According to the NY Times, the violence broke out in the late afternoon in the Mondawmin neighborhood of northwest Baltimore, where more than 2,000 people — politicians, activists, White House officials and civil rights activists including the Rev. Jesse Jackson and Dick Gregory — had gathered for a morning of soaring Gospel music and passionate eulogies for Mr. Gray.

Hours after the service ended, angry groups of people began to throw bottles, rocks and chunks of concrete at officers. Young men surrounded a police cruiser and smashed in its windows in what police described as an organized attack by criminals. Cars were set on fire, and store windows were shattered. A CVS drugstore was looted and set on fire. A check-cashing business was also looted. The cafe portion of the Trinacria Italian Deli, in Baltimore since 1908, was destroyed.

Mayor Stephanie Rawlings-Blake announced that a 10 p.m. to 5 a.m. curfew would be imposed for a week beginning on Tuesday saying, “Too many people have spent generations.”

Too many people have spent generations building up this city for it to be destroyed by thugs.

The governor, at the request of the city of Baltimore, declared a state of emergency and activated the National Guard saying, “Today’s acts of looting and violence in Baltimore will not be tolerated.”

Today’s acts of looting and violence in Baltimore will not be tolerated (…) direct attacks against innocent civilians, business and law enforcement officers (…) there is a significant difference between protesting and violence.

Pastor Jamal Bryant, who delivered Mr. Gray’s eulogy, came back to the neighborhood after the burial on Monday afternoon to appeal for calm, “This is not what the family asked for.”

This is not what the family asked for, today of all days (…) for us to come out of the burial and walk into this is absolutely inexcusable (…) asking every young person to go back home (…) it’s frustration, anger and it’s disrespect for the family.

Relatives of Freddie Gray said during a Monday night news conference that those engaged in violence in Baltimore were not honoring Gray, who died after suffering a spinal injury in police custody this month.

Freddy Gray mother says: I want ya'll to see justice for my son but don't tear up the the city. That's wrong."