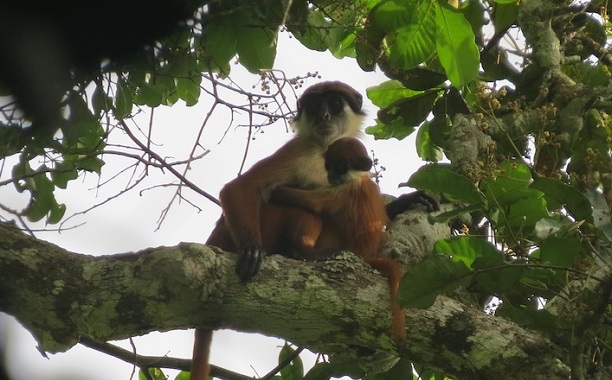 The Wildlife Conservation Society (WCS) indicated that a couple of primatologists working in the forests of the Republic of Congo snapped the very first photograph of the Bouvier’s red colobus monkey– a rare primate which some previously thought to be extinct.

The sighting marks the first time the rare monkey, which is formally known as Piliocolobus bouvieri, has been spotted since the 1970s, according to Live Science. It was discovered by independent field researchers Gael Eli Gnondo Gobolo and Lieven Devreese.

The two researchers embarked on their journey to find and photograph the elusive primate back in February of 2015. The journey took the pair of independent researchers to Ntokou-Pikounda National Park, which encompasses 1,765-square miles of protected lands established to protect a variety of species including chimpanzees, gorillas and even elephants.

Devreese was quoted in a Phys.Org report as having said that their recent photographs are the first in the world and that they provide confirmation “that the species is not extinct”.

The aforementioned report also quoted Dr. Fiona Maisels with the WCS as having said that the Wildlife Conservation Society is “very pleased” with their work as it offered not only confirmation of the species existence, but also “a very clear close-up picture of a mother and infant”.

We’re very pleased indeed that Lieven and Gaël were able to achieve their objective of not only confirming that Bouvier’s red colobus still exists, but also managing to get a very clear close-up picture of a mother and infant […] Thankfully, many of these colobus monkeys live in the recently gazetted national park and are protected from threats such as logging, agriculture, and roads, all of which can lead to increased hunting.

In other news, a recent study found female chimpanzees make weapons for hunting.

Robot Traffic Cops Employed In Democratic Republic Of The Congo
Nearly 300 Females Rescued From Boko Haram: Chibok Girls Not Among Them
To Top