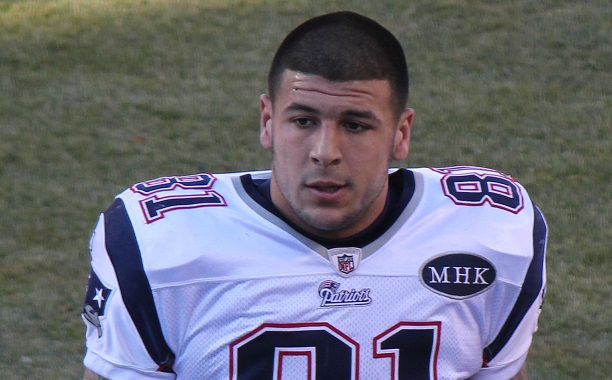 In addition to his recent murder conviction, the former NFL star also been convicted of gun charges stemming from the shooting death of Odin Lloyd, a man who was dating the sister of Hernandez’s fiancee.

The murdered man’s mother, Ursula Ward, was quoted in an NBC News report as having told the judge presiding over the murder trial that her son was the “backbone of the family” and she felt her “heart stop beating for a moment” when she buried her son. Upon hearing the verdict on Wednesday, she gasped and then proceeded to cry.

When the former tight end was arrested, he had just been awarded a whopping $40 million contract to play for the New England Patriots.

The Patriots, whose owner Robert Kraft indicated in testimony at Hernandez’s murder trial that the football star had personally assured him of his innocence, reigned in a Super Bowl Championship while Hernandez was on trial.

Nine-weeks into the trial, the jury reached their guilty conviction which ABC News reported to have come after 36-hours of deliberation over the course of seven days.

While Hernandez has been found guilty in Lloyd’s death after the jurors listened to the testimony of 135 witnesses, he’s also been recently indicted in the 2012 drive-by shooting deaths of two men outside of a nightclub in Boston, Massachusetts.

What are your thoughts on Aaron Hernandez?