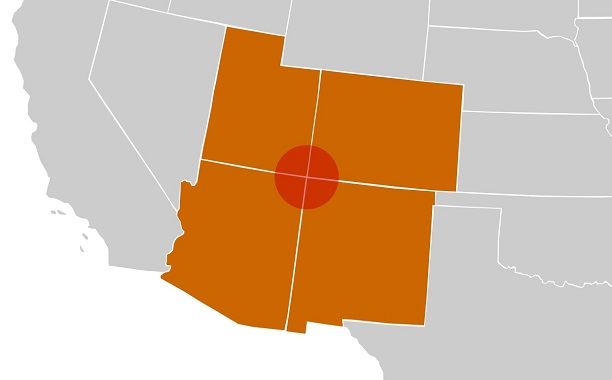 Scientists working to pinpoint the source of a giant mass of methane looming over the southwestern United States have been joined by NASA in an attempt to unravel the mystery of the Four Corners region— where Arizona, Colorado, New Mexico and Utah collide.

Just last year, a study conducted by the University of Michigan and NASA, which was based on images captured between 2003 and 2009 by a European satellite, found the concentration of methane to be the largest concentration of greenhouse gas in the country.

The mysterious hot spot, not to be confused with the mysterious warm blob spotted in the Pacific Ocean, has baffled experts since they were first spotted from space by the European Space Agency back in 2003, according to the Mirror.

In order to probe the methane concentration, researchers are now employing special NASA airplanes carrying the Hyperspectral Thermal Emission Spectrometer (HyTES) and the Next-Generation Airborne Visible/Infrared Imaging Spectrometer (AVIRISng); the latter of which is capable of not only detecting methane, but also mapping it in great detail.

While the methane emissions don’t pose any direct risk to the public’s health or safety in the Four Corners region, CTV News reports that methane emitted from traditional oil and gas operations is usually accompanied by hydrocarbon emissions, leading to smog which is linked to respiratory ailments such as asthma.

The original European satellite which discovered the hot spot is no longer in use, however, researchers plan on setting Japan’s GOSAT satellite’s focus on the region once it passes overhead.

In other news, the National Aeronautics and Space Administration’s Glenn Research Center has released a sneak peek of a robotic submersible concept designed to explore the liquid methane and ethane lakes of Saturn’s moon, Titan.