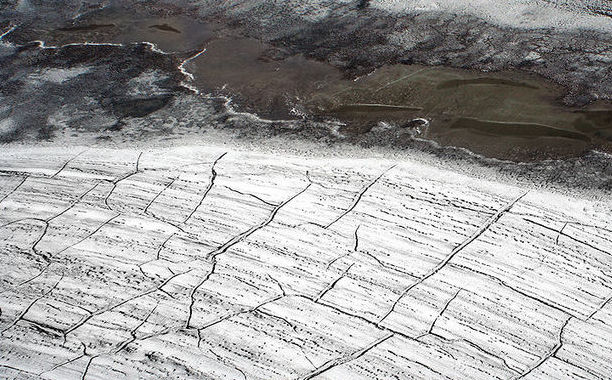 Frozen Arctic and sub-Arctic soil eaten away by microbes could become a new major source of carbon emission, accelerating climate change the rest of the century, but it won’t come so swiftly.

In a review made by government and academic experts it says harmful carbon dioxide an methane generated by microbes digesting melted plants and animal material will gradually enter the atmosphere, according to Daily Mail.

[quote text_size=”small” author=”– Dr. Dave McGuire” author_title=”Senior researcher at the U.S. Geological Survey and a professor of ecology at the University of Alaska Fairbanks”]

It’s a carbon source that shouldn’t be ignored. The estimates that we came up in this synthesis suggest that throughout the rest of this century, it could be on the order of the magnitude of what tropical deforestation currently affects the global carbon cycle.

McGuire is a co-lead author and on of the 17 researchers who worked on a research paper with these conclusions published in the journal Nature.

The paper is an outcome of an extensive research of the Permafrost Carbon Network, a group of more than 200 scientists from 88 research institutions from 18 countries who have studied changes in the Arctic for four years.

Tropical deforestation, which accounts to ten percent of the warming brought on by burning fossil fuels, and substantial amount of that is expected to be matched by the effects of melting permafrost or permanently frozen ground, scientists said.

“People have been sort of proposing that there’s a potential for a ‘permafrost bomb,” McGuire said, a surge that could quickly cause trillions in economic damage to roads, runways, buildings and other infrastructure built on frozen ground. “But our research shows that it is quite unlikely” he added.

Carbon dioxide is a real threat to all living things on Earth, and just a few days ago scientist have linked acidic oceans with mass marine life extinction.

What are your thoughts on global warming and what do you do to prevent it and ensure a safer tomorrow for all of us?