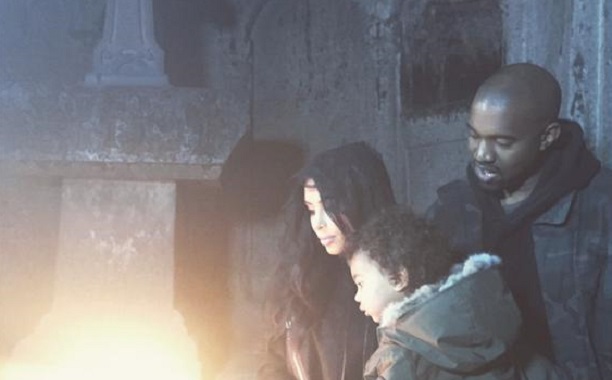 Hollywood power couple Kim Kardashian and Kanye West were spotted on a sight-seeing tour in Armenia on Friday. The couple was joined by Kim’s sister Khloe Kardashian and a military escort as they toured the medieval Geghard Monastery in the Kotayk province of Armenia.

X17 reported that Kim was wearing an all-black outfit, as was her husband, Mr. West. Just one day prior, the two celebrity sisters adorned tan ensembles while posing in front of the country’s flag for a photo opportunity following their meeting with the Armenian Prime Minister Hovik Abrahamyan.

Kim tweeted a picture of their meeting with the prime minster in which she said that it was “an honor” to meet the PM.

It was an honor to meet the Prime Minister of Armenia, Hovik Abrahamyan pic.twitter.com/drfwtClBIV

The two sisters, both celebrities in their own respect, traveled back to the country in remembrance of the 100th anniversary of the Armenian Genocide, which is held on April 24.

In 1915, the Ottoman authorities rounded up, arrested and executed roughly 250 Armenian intellectuals and leaders in Constantinople. The Turkish government’s genocide against the Armenian people began on April 24, 1915.

The genocide lasted until 1917 and by the time it came to an end, an estimated 1.5 million Armenians had been murdered at the hands of the Ottoman turks.

Armenia, which is officially known as the Republic of Armenia, is Kim and Khloe’s ancestral homeland, according to People Magazine.

While sight-seeing on Friday, the group of American celebrities was spotted with an $879 Sony Nex-7 camera.

Kanye’s wife tweeted a picture of herself with with baby North and Mr. West. The message, which went out on Friday to her more than 30 million Twitter followers, received over 3.5K retweets and more than 13K favorites.

In other news about the rapper Kanye West, the hip-hop artist behind The College Dropout is producing a video game about his mom based on “Only One” single he produced with Paul McCartney.