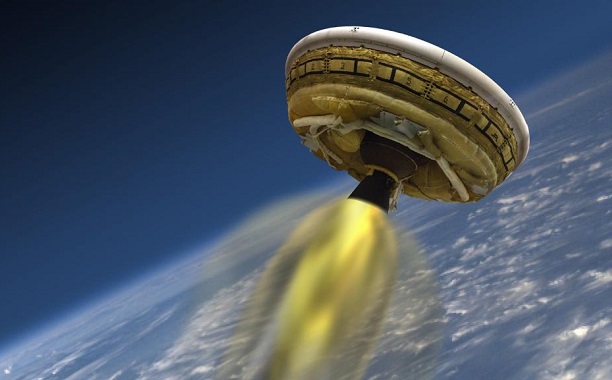 The National Aeronautics and Space Administration (NASA) announced on Sunday that the U.S. space agency will soon be testing the rocket-powered saucer-shaped Low-Density Supersonic Decelerator (LDSD).

The LDSD mission, which is aimed at decelerating the landing of spacecraft landing on the martian surface, is part of the agency’s Space Technology Mission Directorate which tests and flies hardware for use in future missions.

The flying saucer shaped test vehicle will be flying into near-space from the Navy’s Pacific Missile Range Facility located on Kauai, Hawaii. The test is scheduled to take place in June of this year.

NASA is inviting the public at large to tune in for an hour-long live video feed on March 31, from 9 a.m. to 10 a.m., which will be broadcast from the gallery at the agency’s Jet Propulsion Laboratory (JPL) in Pasadena, California. The live stream, which will be hosted by JPL’s Gay Hill, is expected to show the hi-tech vehicle undergoing what the agency referred to as a “spin-table” test.

The live broadcast on Tuesday is an interactive one in which members of the LDSD team will answer questions submitted via Twitter using the #AskNASA hashtag and those submit through the Ustream chat box.

The experimental near-space test vehicle, which measures 15 feet wide and weighs 7,000 pounds, is designed to not only enable the landing of larger payloads on Mars, but also to allow access to higher-altitude sites on the planet’s surface.

A recently published study in the journal Science has found that the planet Mars was once home to a massive ocean which covered around 19 percent of its surface.

Are you excited to see NASA’s flying saucer in action?