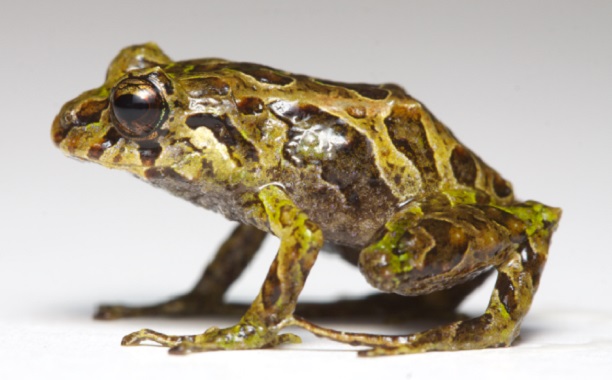 Researchers have discovered a shape-shifting rain frog in Ecuador’s western Andean cloud forest which changes its skin texture in mere minutes, adjusting its appearance to match the texture it’s sitting on.

The mutable rain frog, known formally as Pristimantis mutabilis, was discovered by a Case Western Reserve University PhD student and her husband, who happens to be a projects manager at Cleveland Metroparks’ Natural Resources Division.

Reserva Las Gralarias, the nature reserve which the frogs are found in, was originally created to protect endangered birds in north-central Ecuador’s Parish of Mindo.

Katherine and Tim Krynak, the two researchers behind the recently discovered new frog, and their colleagues from the Universidad Indoamerica and Tropical Herping co-authored a manuscript published in the Zoological Journal of the Linnean Society this week in which thy indicated that their findings have broad implications for how species are and have been identified, as longer field observations may be necessary in order to ensure that one species is not mistaken for two due to the fact that there are now two known species of rain frogs capable of changing their appearance.

While the recently discovered frog’s ability to transform its shape to reflect its surroundings is incredible, it’s not alone in this capacity, as in light of this recent discovery, colleagues working with the couple realized that another frog, one which was previously discovered, also exhibits this texture-changing ability.

Krynak believes that P. mutabilis, which is the first vertebrate known to exhibit the ability to alter the texture of its skin, uses its texture-shifting camouflage to avoid detection by predators such as birds.

Engineers at the University of California at Berkeley recently developed a synthetic color-changing film reminiscent of a chameleon’s skin and last year, scientists developed a new 3D-printed, phase-changing material which goes from soft and pliable to hard and rigid and vice versa with the application of wax and heat.

How long do you think it will be before scientists develop shape-shifting material which morphs like this recently discovered rain frog’s skin?