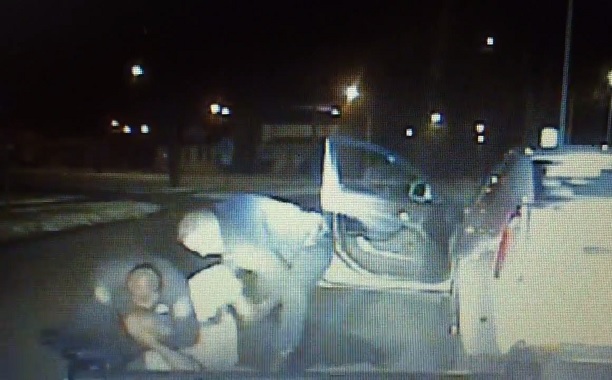 Floyd Dent was pulled over by police officers in Inkster for a traffic violation which quickly escalated into a violent encounter which was caught on video by police dash-cam. The video shows officers forcibly removing Dent from his vehicle before placing him face down on the ground, in a chokehold, and then punching him in the head 16 times — he was also hit with a Taser three times, according to police reports.

The video’s release and subsequent media coverage has sparked outrage as well as what The Detroit News reports to have been at least one protest with dozens involved. The report indicated that Mr. Dent, an African-American, had allegedly been punched, kicked and Tasered by white Inkster cops back in January.

Census data shows that in 2010, the city of Inkster, which is located in Wayne County, Michigan, had a population of 25,369 people; most of whom were African American.

The primary officer involved in the violent traffic stop has indicated that he was protecting himself. The motorist on the other hand, claims he not only did nothing wrong, but he also feared losing his life during the violent ordeal.

Dent was pulled over in an area which police indicated is known for drug activity and that they had been watching his car through binoculars before they observed his lack of a complete stop at a stop sign and turned on their lights, signaling for him to pull over. The police claim that Dent failed to immediately pull his car over.

At this point, 57-year-old Dent claims that an officer ran up to him with his gun drawn, talking about “blowing” his head off, and then pulled him out of his car and “started beating” him.

The next thing I know, the officer runs up to me with his gun, you know, talking about blowing my head off […] Then he grabbed me out of the car and started beating on me, you know. I just couldn’t believe it.

The police have indicated that they ordered Dent to put his hands up, but they were only able to see one and then they heard him yell, “I’ll kill you” to one of the officers. In regards to this alleged verbal threat, Dent’s attorney Greg Rohl was quoted by Clickon Detroit as having said:

You have six responding vehicles. Not one officer is equipped with a microphone to take down this alleged threat

Dent, who has no criminal record, retired from Ford Motor Co. after 37-years. He claims he doesn’t sell drugs nor does he have to do them and that a blood test would show that he didn’t have any drugs in his system at the time of his violent encounter with law enforcement in Inkster.

Police indicated that they had found a bag of crack-cocaine underneath the passenger’s seat, but Dent claims it was planted.

One of the officers seen in the dash-cam recording of the incident was previously charged with planting evidence and falsifying reports by the U.S. Attorney’s Office while they were with the Detroit Police Department back in 2003, however, a jury found the officer not guilty.

The Michigan State Police are investigating the incident.

A judge who examined the video decided to dismiss multiple charges, indicating that there was no evidence that Dent had resisted, attempting to flee or that he had been assaulted by any officers. He continues to face charges for possession of cocaine, however, he has indicated that he won’t plead guilty to something that he didn’t do.

In an unrelated report here on Immortal News, a state trooper is suing the Pittsburgh police after he was pushed, punched, and even kicked in the groin by cops with the Pittsburgh Police Department following a brawl at his brother’s wedding reception — a brawl which he claims he was trying to defuse when police escalated the situation and arrested him on multiple charges.

What are your thoughts on what happened to Floyd Dent of Detroit after watching the video of his traffic stop in Inkster?