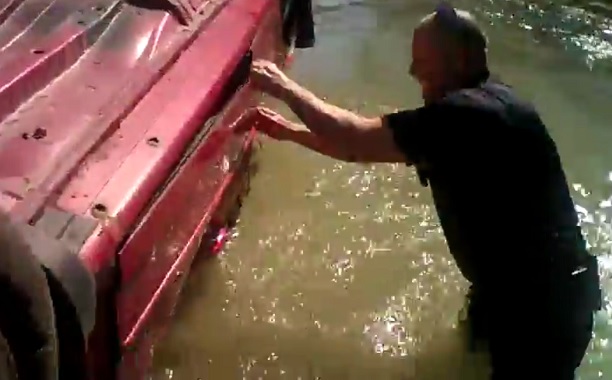 This video footage captured by body cameras worn by the first responders on the scene of an overturned vehicle in the Spanish Fork River shows the heroic rescue of 18-month-old Lily Groesbeck.

Lily’s mother, 25-year-old Jennifer Groesbeck, was killed in the accident which took place on March 7, 2015.

The pair were driving home on Friday night when Jenny’s car struck a sloped cement barrier located at the south end of a bridge on Main Street. After striking the barrier, her vehicle then careened off the side of the bridge into the water. The accident took place around 10:30 pm. and it wasn’t until the following day around 12:30 p.m. that the wreck was discovered.

When responders arrived on the scene of the wreck, one responded can be heard alerting the others to the existence of the infant in the vehicle, as they shouted, “there’s a baby!”

Later, a rescuer can be heard saying “we’re helping” and “we’re coming.”

After a fireman reached into the backseat of the overturned vehicle and rescued Lily from her car seat, where she had been hanging upside down for nearly 14 hours with the icy waters of the Spanish Fork River flowing beneath her, she was rushed by ambulance to Mountain View Hospital and then later to Primary Children’s Hospital where she was later released after having spent several days in care.

She was released from the hospital on Wednesday, Herald Extra reported.

Of the first responders, seven were treated for hypothermia following the successful rescue of the child. Lily’s mother was found behind the wheel of the car and was pronounced dead at the scene.

Spanish Fork Police Officer Tyler Beddoes was quoted by the NY Daily News as having said that they “could see a person in the front seat and then we heard a voice saying, ‘Help me, we’re in here.'”

We could see a person in the front seat and then we heard a voice saying, ‘Help me, we’re in here.’ It was clear as day […] We replied back, ‘hang in there, we’re trying what we can.’

Jennifer Groesbeck’s funeral is scheduled to be held on Saturday.